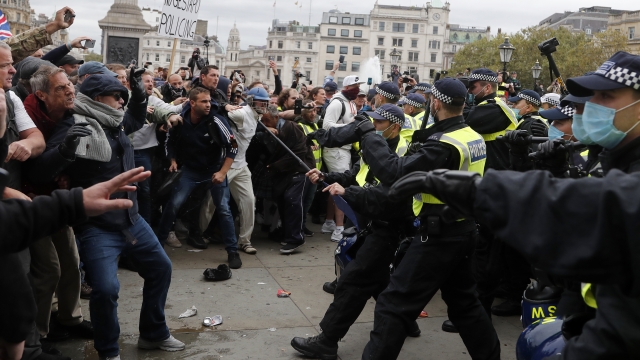 SMS
Police Move In As Thousands Protest COVID-19 Restrictions in London
By Alex Arger
By Alex Arger
September 26, 2020
Crowd in London chanted, "Take off your mask," and some raised signs, with one saying "Humanity Wake Up."
SHOW TRANSCRIPT

Police in London moved in to break up a protest of thousands of people demonstrating today against coronavirus restrictions. Authorities said protesters were violating social distancing rules.

Metropolitan Police Officers were visible around the perimeter as the "We Do Not Consent" protest began. Thousands chanted, "Take off your mask," and some raised signs, with one saying "Humanity Wake Up." Speakers at the rally argued they were standing up for freedom of expression and human rights. They rejected critics claims they were fanning dangerous conspiracy theories about the pandemic.

Police moved in after about three hours of protests, though many protesters regrouped in other areas. Authorities said in a statement: "Crowds in Trafalgar Square have not complied with the conditions of their risk assessment and are putting people in danger of transmitting the virus. This has voided their risk assessment and we have informed the event organizers they are no longer exempt from the regulations."

Protesters threw water and bottles as officers used batons against them, leaving some bleeding or with visible injuries. Clashes put at least three protesters and an officer in medical attention. Last week, a similar event left several officers injured after some protesters became violent.

The protests, which are expected to resume Sunday, come as Parliament is set to review new COVID-19 legislation. This week, the government placed a 10 p.m. curfew on bars and restaurants, and fines for non-compliance were increased.

London is seen as an area of concern on the British government's COVID-19 watchlist, with new infections, hospitalizations and deaths all rising in recent weeks.