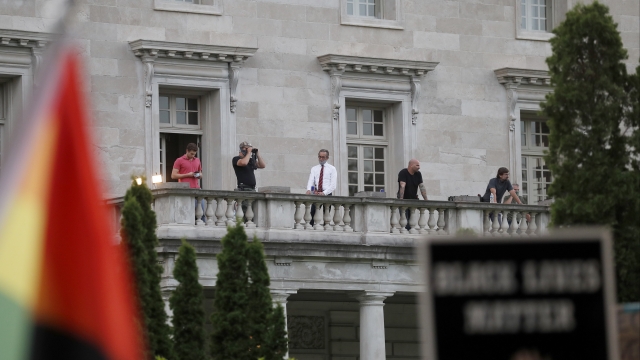 St. Louis police searched the home of a couple who went viral in June for pointing their guns at protesters who were passing by their upscale home.

The couple went viral in late June after they pointed their weapons protesters who entered their gated neighborhood. They fired no shots.

The protesters were passing by on the way to protest St. Louis Mayor Lyda Krewson. However, Mark McCloskey told local media the protesters threatened to kill his family and authorities told the St. Louis Post-Dispatch they saw armed protesters in the crowd and armed themselves in turn.

St. Louis police said at the time they weren't investigating the couple for wrongdoing, St. Louis Circuit Attorney Kimberly Gardner last month said she would initiate a probe of the incident, in which she said "peaceful protesters were met by guns and a violent assault."

A follow-up protest was held near the McCloskey's house on July 3rd. Photos taken showed an armed man standing at the rear of the home.