Police Say Teenager Was Groped And Pepper-Sprayed Outside Trump Rally 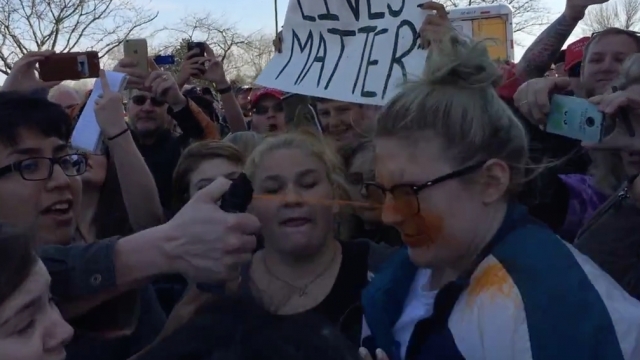 SMS
Police Say Teenager Was Groped And Pepper-Sprayed Outside Trump Rally
By Eugene Daniels
By Eugene Daniels
March 29, 2016
Police say they're looking for two suspects: one for the sexual assault and one who pepper-sprayed the teenager.
SHOW TRANSCRIPT

Police say a 15-year-old girl was groped and then pepper-sprayed during an anti-Donald Trump protest near the presidential candidate's rally in Wisconsin.

According to a police statement, the girl was groped and then confronted a man she accused of doing it. Video shows she punched him and then was pepper-sprayed in the face. The police department says it's "currently looking for two suspects, one for the sexual assault and one for the pepper spray."

The protest was planned before Trump's rally took place in Janesville. According to the Facebook event page, more than 1,000 people said they were going. The organizer stressed the event was meant to be peaceful, saying, "Violence will not be tolerated!"

Interactions between Trump supporters and anti-Trump protesters have turned increasingly violent in recent weeks. Trump's rivals have blamed the "culture of violence" the candidate creates.

This video includes images and clips from CNN and YouTube / derek94gt.