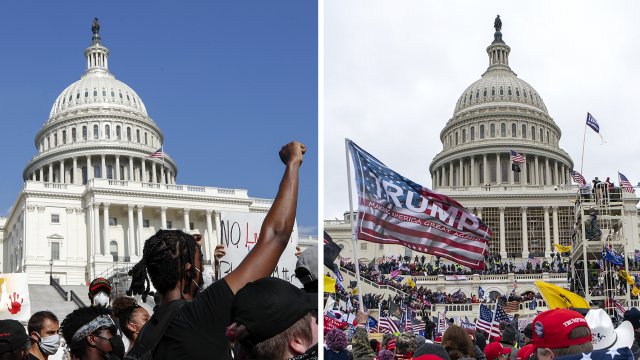 SMS
BLM Activists Decry Double Standard In Capitol Police's Timid Response
By Jamal Andress
By Jamal Andress
January 7, 2021
Many participants and obvservers of the summer's protests are comparing the police response Wednesday to what they have experienced.
SHOW TRANSCRIPT

The summer of 2020 was marked by significant acts of police violence and widespread protest.

But as the dust settles on an unprecedented attack on the nation's Capitol, many observers who took to the streets this summer can't help but compare the police response Wednesday to what they have experienced.

Mike McBride is an activist and reverend in the Bay Area.

MCBRIDE: "It's terrifying to have people with weapons standing in front of you. And you know that they are aware that if they harm you, there likely will be no recourse to them. I mean, it's terrifying."

Activists and protesters across the country have complained and in some cases filed suit alleging police brutality during peaceful protest.

In Buffalo, a 75-year-old man was shoved to the ground during a protest against police brutality, causing nationwide backlash. He was hospitalized for two weeks.

"I have put my body on the line to expand people's rights, for liberation, for freedom," said Jennifer Epps-Addison.

Jennifer Epps-Addison is an activist and the network president for the Center for Popular Democracy.

EPPS-ADDISON: "Those are the things that have gotten me arrested. And so what these folks were doing, they were literally trying to preserve a crumbling altar of White supremacy. And that is not the same thing as protest."

During the insurrection at the Capitol, United States Capitol Police arrested just 14 people from beginning to end. D.C. police made more than 50 arrests after they were brought in as backup, but the vast majority of those arrests were for breaking curfew, not breaching the Capitol building.

Compare that with one Black Lives Matter protest in Dallas, where more than 600 people were arrested for blocking a highway during a peaceful protest.

EPPS-ADDISON: "I could give you a long list of things, egregious crimes I was arrested for, like singing and chanting and dancing. And yet these folks not only scaled the Capitol building, not only entered the building with firearms, but then began to desecrate this building, you know, members of Congress' offices? I think we heard something like maybe 15 arrests. A friend of mine joked, there have been birthday parties with more arrests than that."

Several law enforcement agencies, including the FBI, say they will be going back over footage from the incident and plan to make subsequent arrests and file charges.

But that doesn't change the message this incident sent to many activists and protesters across the country.