Police Push Back Against Vaccine Mandates 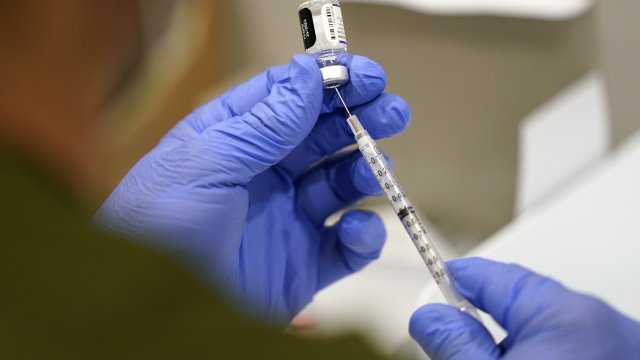 SMS
Police Push Back Against Vaccine Mandates
By James Packard
By James Packard
October 20, 2021
Hundreds of police officers have died from COVID-19. But still — the industry is largely skeptical of the shots.
SHOW TRANSCRIPT

As vaccine mandates hit their deadlines, the consequences are coming down on the country's police forces.

"We're still going to give them one last opportunity to do the right thing," said Chicago Mayor Lori Lightfoot.

Chicago's mayor — stripping 19 officers of their police powers for refusing to report their vaccine status. The fight going to court, where a judge ordered the officer's union boss to stop making public statements, like this one:

"You are under no obligation to respond or comply," said John Catanzara, president of the Chicago Fraternal Order of Police.

He had argued  vaccinations were a matter of collective bargaining. But pulling more than a dozen officers is a sore spot in a city already dealing with spiking crime.

In San Diego, a similar story. Around 90% of San Diego's officers said they think vaccines should be an individual choice. Almost half said they'd rather be fired than comply with a mandate.

"That's concerning, I mean, the possible impacts if we were to lose officers," said San Diego Police Chief David Nisleit.

The union is arguing officers could easily get hired elsewhere and is urging the city to provide alternatives, like regular testing.

It's trying to prevent cuts to an already strained force.

"You look at this police department, our ratio of officers to citizens is the second-lowest in this nation, and so obviously that impacts our ability to respond to crime," said Nisleit.

In Florida, Karen Weiskopf is pleading with police officers — and anyone who will listen — to get their shot. Her husband, officer Michael Weiskopf, died in August after battling COVID-19 for close to a month. He was not vaccinated when he got infected.

"The pain. There wasn't one day, one hour, one moment that he didn't suffer," Karen Weiskopf said.

"I said, is there any way I can go to sleep and just die of a broken heart because it'd be a lot easier," she said.

"Quit paying attention to the politicians that think they know what they're talking about, but they don't," said Sheriff Grady Judd of Polk County, Florida.

Police leaders are encouraging their officers to get the shot. But many union heads are standing their ground on this argument.

"We don't like being mandated and pushed into anything like that," said John Kazanjian, president of the Florida Police Benevolent Association.

Kazanjian, the head of Florida's largest police union, is vaccinated — and encouraging others to do the same, but:

"It's a freedom of choice, absolutely, that's why we live in this great country, the United States," said Kazanjian.

Florida has one of the highest counts in the country of officers who have died from COVID-19: 57 and counting.

Each one leaving behind a family member — to wish things could be different.

"It's still surreal," said Weiskopf. "I'm taking it, um, I think hour by hour and day by day.”