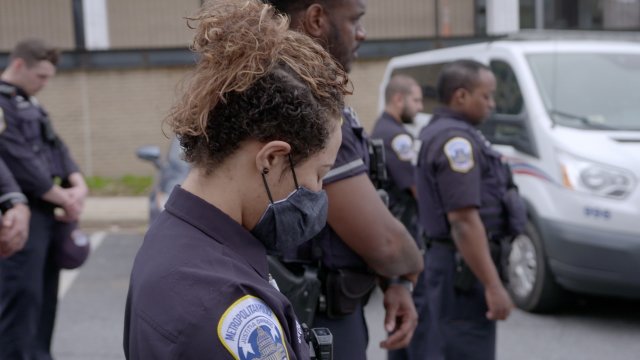 SMS
'They're Going To Do Their Job:' Police Amid Coronavirus Pandemic
By Sasha Ingber
By Sasha Ingber
April 1, 2020
The number of police officers with coronavirus is rising in major cities across the country. One police chief fears protective gear may run out.
SHOW TRANSCRIPT

Across the United States, first responders have found themselves on the frontlines of a war with an invisible foe: COVID-19. Casualties among police are mounting, especially in cities where the coronavirus is spreading quickly.

"We have lost three members of our family in a little over 48 hours. As I stand here, I cannot begin to describe what we are feeling," New York City Police Commissioner Dermot Shea said.

"We have lost five members in a week."

Over 15% of the New York City Police Department’s uniformed workforce — more than 5,600 people — are currently out sick. Since the pandemic began, nearly 1,200 members have tested positive for the coronavirus.

In Washington, D.C., a similar trend might be beginning, with at least 13 police officers testing positive and another 167 in self-quarantine.

"If you look at the ratios, it's pretty close. We probably should have a little bit more."

Police Chief Peter Newsham told Newsy that he's concerned personal protective equipment might run out but couldn't say when. At a recent gathering that ended with a priest's blessing for protection, Newsham told police officers to "be judicious" with their equipment.

"They keep coming to work," Newsham said. "They're going to do their job. They know that they have a responsibility to keep the community safe. That's what I love about them."

As the coronavirus spreads deeper into communities, police officers tell Newsy that they're concerned for their own physical safety. One said he was scared of catching the coronavirus at work and passing it onto loved ones, despite his protective suit. He said he was letting minor traffic violations go to minimize exposure.

But crime doesn't stop. In New York, adjustments include aerial patrols of public parks and thousands of officers working from home. In D.C., the department has been asking people with complaints to meet officers outdoors and urging citizens to send letters and emails to detectives. Some people who have been charged are given citations and released instead of being brought to the police station.

"The two things we're monitoring is our staffing levels, and then we're also monitoring crime. Interestingly or not, some of our property crimes have dipped a little bit, not significantly, but our shooting crime has really not been impacted by this at all," said Newsham.

There is also the question of how police enforce stay-at-home orders. In New York, Gov. Andrew Cuomo asked Wednesday how many people have to die for New Yorkers to take social distancing seriously.

In Chicago, at least 50 members of the police department have currently tested positive for the virus. When asked how police will handle potential public unrest amid a stay at home order, a spokesperson told Newsy that patrols are at full levels across the city and that "the most important thing for the Chicago Police Department is the safety and welfare of all Chicagoans."