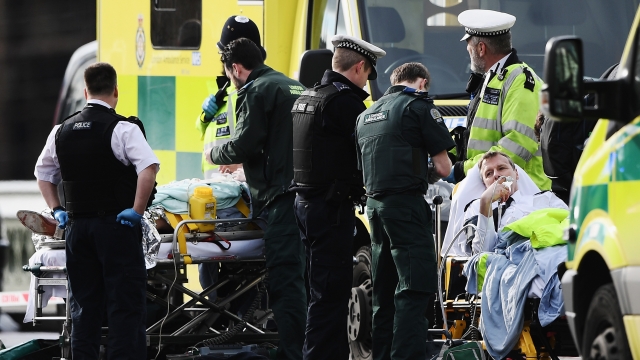 Police say a terror attack near the U.K.'s Parliament has left four people dead, including the attacker, and 20 injured.

Parliament went on lockdown after a "firearms incident" was reported nearby at Westminster Bridge around 2:40 p.m. local time.

An eyewitness said a vehicle "mowed down at least five people." The London Ambulance Service confirmed it treated at least 10 patients on the bridge. The bridge is located less than half a mile from the Palace of Westminster, which is where both houses of Parliament meet.

Officials say the driver of the vehicle then fatally stabbed an officer on Parliament grounds before being shot by police.

"There has been a serious incident within the estate. It seems that a police officer has been stabbed, that the alleged assailant was shot by armed police," said David Lidington, the leader of the House of Commons.

There was a loud bang. Screams. Commotion. Then the sound of gunshots. Armed police everywhere.

An investigation is still ongoing, but for now, police think there was only one attacker.

Prime Minister Theresa May was voting at Parliament when the stabbing occurred. She was seen being escorted out of the building by a police officer shortly afterward.

Officials are asking people to avoid the areas surrounding the bridge and Parliament. Police have also shut down Westminster Underground Station.

White House press secretary Sean Spicer tweeted that President Donald Trump has been briefed on the incident and is monitoring the situation. In a phone call with Prime Minister May, Trump offered his condolences and pledged full cooperation and support from the U.S. in "bringing those responsible to justice."