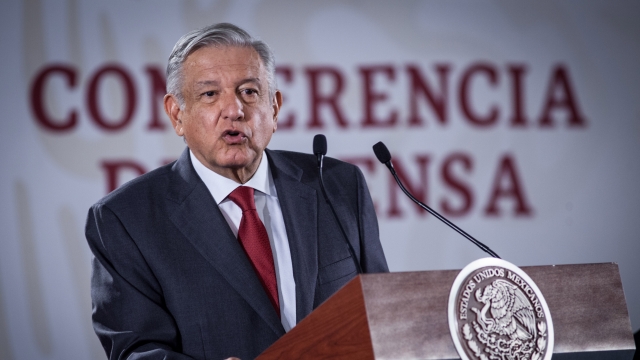 SMS
Police In Mexico Protest Over New National Guard Plan
By Caitlin Baldwin
By Caitlin Baldwin
July 5, 2019
The Mexican president's plan would combine the police, army and military into one force to crack down on illegal immigration an organized crime.
SHOW TRANSCRIPT

Hundreds of police officers blocked streets and barricaded themselves in the main police command center in Mexico City this week to protest the government's decision to combine the federal police with the National Guard.

The change is part of the security plan Mexican President Andrés Manuel López Obrador announced earlier this year. It would combine the police, army and military into one massive force aimed at cracking down on illegal immigration and organized crime.

López Obrador has vowed to fight corruption and violence since his presidential campaign. A report found Mexico had more than 33,000 homicides last year —many linked to cartel violence. The country has a population of around 130 million people.

And Mexico's been working with U.S. President Donald Trump to curb the flow of migrants from Central America. López Obrador deployed thousands of troops to the northern part of the country last month to help stop illegal immigration.

Local news outlets report the change to the federal police force could affect around 20,000 officers, and their concerns are wide-ranging. Protesting officers say their pay and benefits will be cut if they join the new force, but worry they'll be fired if they refuse. The officers would also have to pass the National Guard entrance exam, and many fear they won't.

Mexico's security minister said he's willing to meet with police to discuss the decision, but says the government will still move forward with its plans and that the requirements to enter the National Guard won't change.