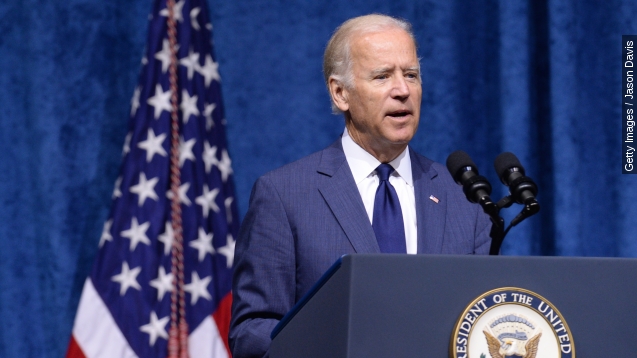 The federal government and New York City are giving $79 million in grants to police jurisdictions around the country to test backlogged rape kits. ( Video via WXYZ)

On Thursday, Vice President Joe Biden and Attorney General Loretta Lynch announced the Department of Justice will set aside $41 million and Manhattan's District Attorney's office will give $38 million. The money will fund testing of about 70,000 rape kits from 27 states, many of which have been sitting in warehouses for years. ( Video via NBC)

"Testing rape kits should be an absolute priority for the United States of America. It works, it matters, it brings closure, it brings justice and thats why we are here," Biden said.

A rape kit is a forensic examination a survivor may choose to undergo and is a tool to catch perpetrators of sexual assault. During the four to six-hour exam, a doctor or nurse collects evidence, such as DNA, although the contents collected vary from state to state. ( Video via CBS, The Plain Dealer)

In most cases, forensic labs have struggled to test rape kits due to lack of money and not enough staff. This is why the grants are so important.

Las Vegas alone has more than 6,000 rape kits waiting to be tested, a backlog that could have taken more than 60 years to catch up with. Now, with the $5.6 million, Las Vegas Metropolitan Police Departments forensic lab can clear it in as little as three years. ( Video via KTNV)

When 10,000 untested rape kits were found in a forgotten Detroit police warehouse in 2009, they desperately turned to private donations for help. Five years later, all rape kits have been tested, and now, prosecution efforts are slowly on their way. ( Video via WXYZ)

"The work isn't done but this is a huge mile stone in terms of making positive progress," said Michigan Governor Rick Snyder.

And Manhattan District Attorney Cy Vance said the money is only the begining.

He told NBC, "We have to completely reverse the approach that led us to have unsolved rape kits in storage units all around the country. It's a disgrace. How it got to that point, I can't answer. But I do know that we can solve it."

This video includes video from our Scripps partners WXYZ and KTNV.