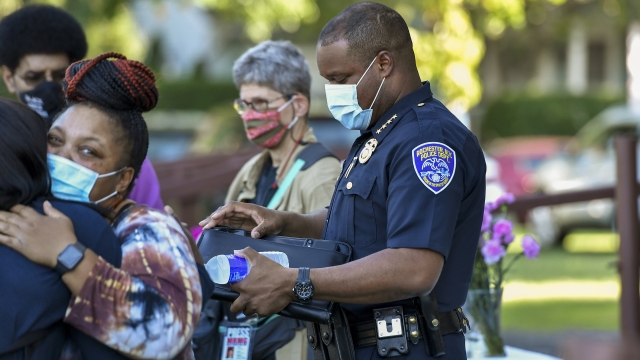 The police chief of Rochester, N.Y. and his top deputy have abruptly announced their retirements and other senior commanders may be on their way out.

The news Tuesday comes as protests and tensions grip the city after last week's release of a video of Black man who died of suffocation after police put a hood over his head.

Daniel Prude died on March 30, seven days after Rochester police detained him after he was found running naked in New York's third-largest city. He had lost consciousness after officers put a hood on him for spitting and then pinned him to the ground.

Prude's family accused police of a cover-up. And protesters called for the police chief to go. And Tuesday Chief La'Ron Singletary said in a statement he is doing just that.

Chief Singletary said his handling of Prude's death has been mischaracterized. He declared (quote): "I will not sit idly while outside entities attempt to destroy my character."

Mayor Lovely Warren said she didn't seek the chief's resignation and she indicated other top commanders will now follow him out the door. She said without elaboration (quote): “The entire Rochester Police Department command staff has announced their retirement."