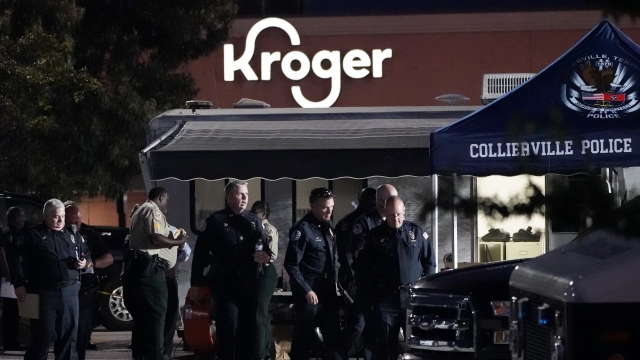 SMS
Police: TN Grocery Store Gunman Was Vendor, Didn't Have Target
By Associated Press
By Associated Press
September 23, 2021
The shooting left one person dead and 14 others injured while police said the gunman died of an apparent self-inflicted gunshot wound.

A gunman who killed one person and wounded 14 others in a Tennessee grocery store did not appear to target anyone specifically as he rampaged through the building on a sunny Thursday afternoon, police said. The entire shooting was over within minutes as first responders swarmed the scene.

On Friday, some of the wounded were still in critical condition and fighting for their lives, Collierville Police Chief Dale Lane said at a morning news conference.

Still, the outcome could have been worse, he said. The shooter, a “third-party vendor" who police said worked at the store on a daily basis, died of an apparent self-inflicted gunshot wound within a couple of minutes of police arriving at the Kroger in the upscale suburb outside of Memphis.

“We all want to know the why," Lane said of the shooter's motive. "But today, less than 24 hours, we’re not ready to tell you that.”

The victims included 10 employees and five customers. Lane identified the woman who was killed as Olivia King.

Lane said police received a call around 1:30 p.m. about the shooting and arrived almost immediately, finding multiple people with gunshot wounds upon entering the building.

Lane said a police SWAT team and other officers went aisle to aisle plucking panicked people from hiding in freezers and locked offices and taking them out safely.

Earlier this year, Tennessee became the latest state to allow most adults 21 and older to carry handguns without first clearing a state-level background check and training. The measure was signed into law by Republican Gov. Bill Lee over objections from some law enforcement groups and gun control advocates concerned the measure would possibly lead to more gun violence.

The Kroger Co., based in Cincinnati, Ohio, issued a statement Friday morning saying it was “horrified and heartbroken” by the shooting and was cooperating with law enforcement. The company in 2019 asked its customers not to openly carry guns while visiting its stores.