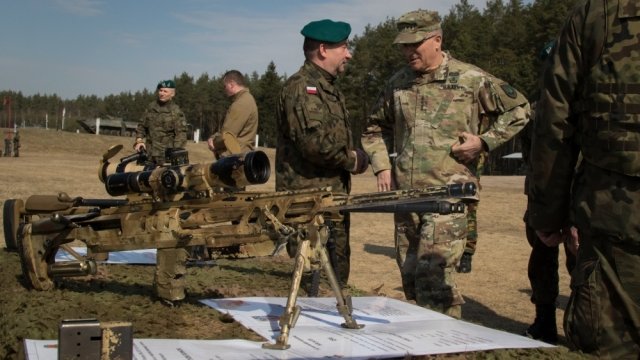 SMS
Poland Reportedly Wants A Permanent US Troop Presence
By Ethan Weston
By Ethan Weston
May 28, 2018
Poland may be willing to pay $2 billion to have a permanent U.S. troop presence in the country.
SHOW TRANSCRIPT

Poland reportedly wants a permanent U.S. troop presence, and it's willing to pay up to $2 billion to get it, according to Polish news portal Onet.

The country wants U.S. troops because of what it sees as growing Russian hostility in the region. That's according to a proposal from Poland's defense ministry.

The country's defense minister reportedly held talks with U.S. officials on the issue and told Poland's Radio 1 the U.S. Senate has asked the Pentagon about doing an assessment.

A Kremlin spokesperson told Russian state-run TASS news agency that Moscow was prepared to respond if NATO members — like Poland and the U.S. — continued to expand their infrastructure in the region.