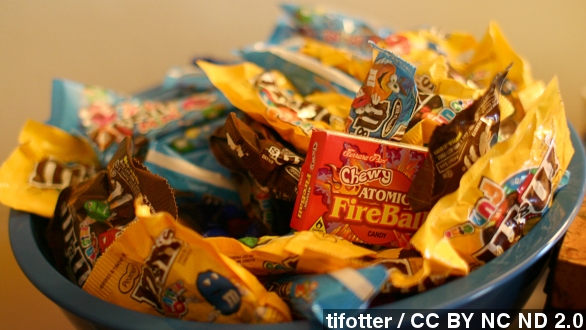 SMS
Poisoned Halloween Candy: More Fiction Than Fact
By Madison Burke
By Madison Burke
October 26, 2014
Parents are warned against poisoned candy and razor blades every Halloween, but there are very few examples of either.
SHOW TRANSCRIPT

We hear the warnings every year.

ABC: "They say moms and dads should always check their kids Halloween candy before they dig in."

HOWCAST: "You can ask your local hospital or care center if they X-ray candy on Halloween night or go the easier route. Just toss it and replace it with candy you've bought yourself."

Parents are told to check their kid's Halloween loot for poisoned candy and razor blades. But when did this paranoia about Halloween candy begin and is it legitimate?

It might have started with the media. In 1970, New York Times reporter Judy Klemesrud wrote, "that plump red apple that Junior gets ... may have a razor blade hidden inside. The chocolate 'candy' bar may be a laxative, the bubble gum may be sprinkled with lye."

And a syndicated advice columnist known as "Dear Abby" warned in the 80s, "somebody’s child will become violently ill or die after eating poisoned candy or an apple containing a razor blade."

But those articles were short on specifics for a reason: there really aren't many examples of that kind of thing happening. And yet the fear took off and can still be felt today.

University of Delaware sociologist Joel Best has been looking into this fear for about 30 years, and he says the idea that strangers are out there using Halloween candy to poison random children just isn't true.

One Halloween candy poisoning case has occurred, but it was not a random act. A father was convicted of poisoning his 8-year-old son via candy in 1974 to collect life insurance money.

And as for razor blades, the cases are very rare but are highly publicized.

Razor blade in candy stories occasionally pop up and are heavily covered by the media. Fortunately, when they do happen, there's typically no serious injury.

So parents feel free to relax a bit. All that high-sugar candy might not necessarily be good for your kid, but it's not as dangerous as all the bad press makes it out to be.