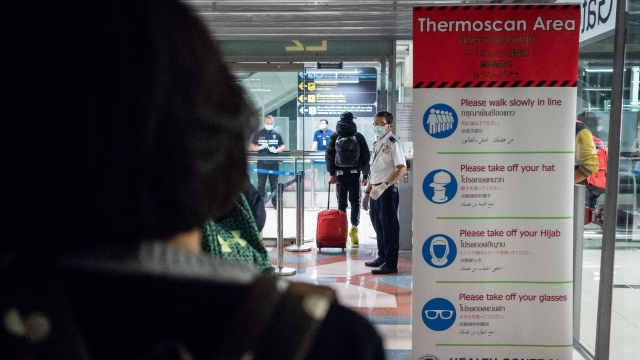 SMS
Pneumonia Outbreak In China Appears To Be Linked To Coronavirus
By Meg Hilling
By Meg Hilling
January 9, 2020
Health officials say as of Sunday, 59 people in Wuhan, China, were being treated for the mysterious respiratory illness.
SHOW TRANSCRIPT

Scientists in China say a pneumonia outbreak appears to be linked to a new coronavirus.

Coronaviruses are part of a family of viruses that includes SARS, or severe acute respiratory syndrome, which can be deadly.

Health officials say as of Sunday, 59 people in Wuhan, China, were being treated for the mysterious respiratory illness, which was initially detected in December. The cause and how the illness is transmitted has not been identified. Cases are being reported in Hong Kong, South Korea and Taiwan.

Scientists say symptoms of the illness include fever and breathing difficulty, but it does not appear to be as severe as SARS. A SARS outbreak in 2002 killed 774 people before being contained in 2003. A total of 8,098 people were infected with the illness throughout 37 countries.

According to the Centers for Disease Control and Prevention, travelers in the region should avoid living or dead animals, animal markets and contact with sick people, as investigations into the illness continue.