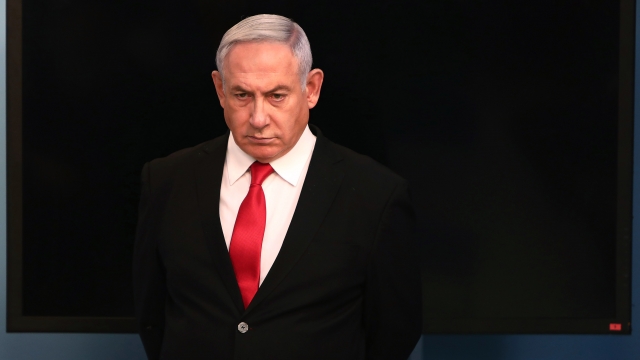 SMS
Netanyahu In Self-Quarantine After Aide Tests Positive For COVID-19
By Ahmed Jawadi
By Ahmed Jawadi
March 30, 2020
​Prime Minister Benjamin Netanyahu's office said he has "not come into close contact with the individual" but will isolate himself anyway.
SHOW TRANSCRIPT

Israeli Prime Minister Benjamin Netanyahu has gone into self-quarantine after an aide tested positive for the coronavirus.

Netanyahu's office said Monday that although he had "not come into close contact with the individual," he and some of his staff will still self-isolate "until the epidemiological investigation is completed." A spokesperson later tweeted that Netanyahu, his family and staff have all tested negative for the virus, but that "he will remain quarantined until further instructions are issued by the Ministry of Health."

On Monday, Netanyahu unveiled new restrictions meant to curb the virus' spread in Israel. They include banning public prayer services and any other gatherings of more than two people "who are not from the same nuclear family."