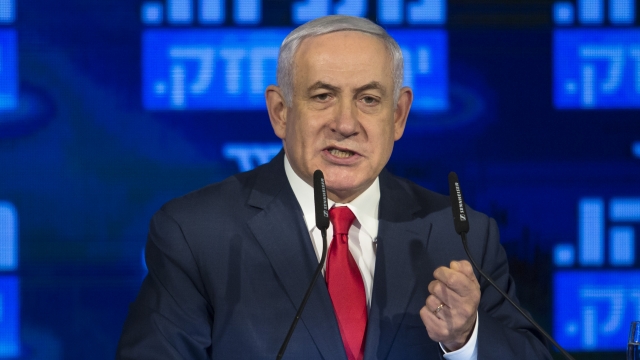 SMS
Israel Bans U.S. Reps. Omar And Tlaib From Entering The Country
By Adam Elrashidi
By Adam Elrashidi
August 15, 2019
In a tweet Thursday morning, the president accused Omar and Tlaib of hating "Israel & all Jewish people" and called them a "disgrace."
SHOW TRANSCRIPT

Democratic lawmakers, civil rights activists and some pro-Israel policy groups criticized the announcement. Sen. Elizabeth Warren called it an "unprecedented" strike against both diplomacy and U.S.-Israeli relations. Critics also took issue with President Trump's continued attacks against his country's own lawmakers and their diplomatic efforts.

In a tweet Thursday morning, the president accused Omar and Tlaib of hating "Israel & all Jewish people" and called them a "disgrace." He also said "Minnesota and Michigan will have a hard time putting them back in office," despite both Omar and Tlaib handily winning their seats last November.

Last month, Israeli Ambassador Ron Dermer said Omar and Tlaib would be allowed to visit "out of respect for the U.S. Congress and the great alliance between Israel and America." On Wednesday, though, Israeli officials reportedly told congressional leaders that Netanyahu intended to change course.

President Trump, Prime Minister Netanyahu and pro-Israel activists have often accused Omar and Tlaib of anti-Semitism over the congresswomen's criticism of the Israeli government and their support for the Boycott, Divestment and Sanctions movement, which protests Israel's treatment of Palestinians. While Omar has apologized for her previous comments on U.S.-Israeli policy, the congresswomen and their supporters have pushed back against such criticism, denouncing them as political smears.

In a statement, Halie Soifer, the executive director of the Jewish Democratic Council of America, urged Netanyahu to reconsider his position.

She said, "Banning members of Congress from visiting Israel, where they can see facts on the ground with their own eyes, is counterproductive and plays into President Trump's goal of politicizing support for Israel."

Axios reports that Omar and Tlaib were scheduled to arrive in Israel on Friday and stay in the region for four days, primarily in the Palestinian territories. The freshman lawmakers planned to visit the Temple Mount in Jerusalem and meet with representatives of the Palestinian Authority.

According to their congressional itinerary, Omar and Tlaib planned to be in the region for four days, primarily in the Palestinian territories. They planned to meet with Palestinian youth and civil society organizations to learn about their lives, especially since the Trump administration moved to stop providing aid to Palestinians living in the West Bank and Gaza.