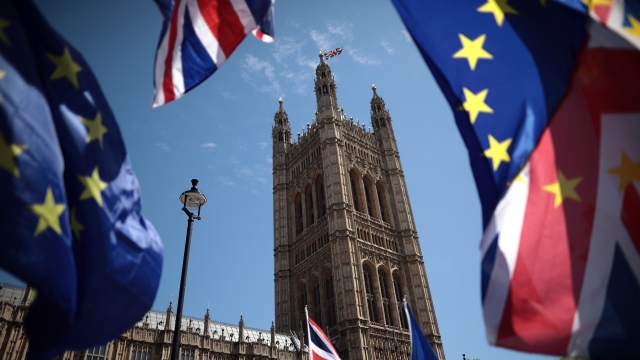 SMS
Boris Johnson Faces Uncertain Path To Brexit During Parliament Hiatus
By Adam Elrashidi
By Adam Elrashidi
September 10, 2019
The British prime minister has resolved to Brexit "do or die," but a path to the Oct. 31 deadline is uncertain after defeats in Parliament last week.
SHOW TRANSCRIPT

British Prime Minister Boris Johnson will have his Brexit, "do or die." But he faces an uncertain path to the Oct. 31 deadline - and now with Parliament suspended until Oct. 14, how will that happen?

Last week, Parliament voted to block a no-deal Brexit, forcing Johnson to seek an extension from the EU - a move he strongly opposes.

Johnson could ignore the mandate or challenge it in court. He could also, in effect, tell the EU to decline his request for an extension. EU leaders are reportedly hesitant to grant the UK a third extension for the sake of political theater, but some diplomats support the idea of an extension until Jan. 31.

Johnson had called for a snap election in an attempt to regain the support he lost at Westminster last week, but Parliament twice rejected his bid.

In the meantime, the prime minister has resolved to continue negotiating with Brussels over the so-called Irish "backstop", which would keep Northern Ireland and the U.K. in a customs union with Ireland and the EU - a situation opposed by pro-Brexit MPs.

On Monday, Johnson reiterated his confidence in Brexit during an appearance with Irish Prime Minister Leo Varadkar, saying there was plenty of time to strike a deal before EU leaders meet next month to discuss the way forward.

Johnson said, "If we really focus, I think we can make a huge amount of progress" but Varadkar pushed back, saying "There is no such thing as a clean break."