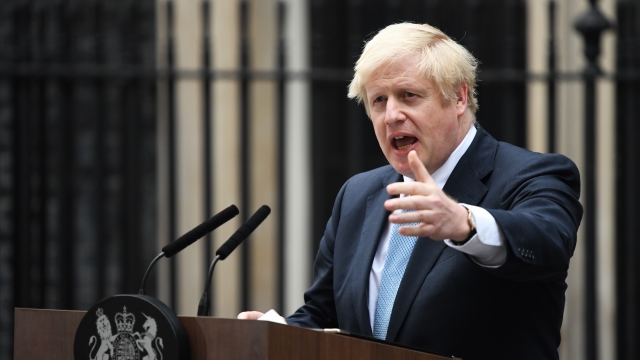 "We are leaving on 31 October, no ifs or buts." British Prime Minister Boris Johnson made that statement Monday amid reports that legislators plan to block a no-deal Brexit from happening next month.

According to Buzzfeed News, leaked documents show a coalition of lawmakers will propose legislation requiring Johnson to seek a Brexit extension if no agreement is reached by the October deadline. They reportedly plan to do so when Parliament resumes Tuesday.

Critics of a no-deal Brexit say it could hurt the U.K. economy, while Johnson has dismissed such concerns as "fearmongering." He has reportedly threatened to boot any Conservative who votes against his strategy.

Several members of Johnson's own party haven't taken kindly to his threat. Ex-Conservative legislator Nick Boles accused the party of being "taken over" by the "hard right."

In a radio interview with the BBC, Boles said: "The Conservative Party has fallen prey to an almost religious obsession with the hardest form of Brexit, which is obviously a Brexit with no deal."

Last month, Johnson said he would suspend Parliament for five weeks starting Sept. 9, which would leave lawmakers little time to iron out a deal. Thousands of Brits protested the announcement on Saturday.

Johnson has defended the decision, saying it's necessary for the sake of his new government. Meanwhile, citizens on both sides of the Brexit debate have decried the ongoing political instability as an attack on Britain's democracy.