Pluto's Weather Is More Active Than We Thought 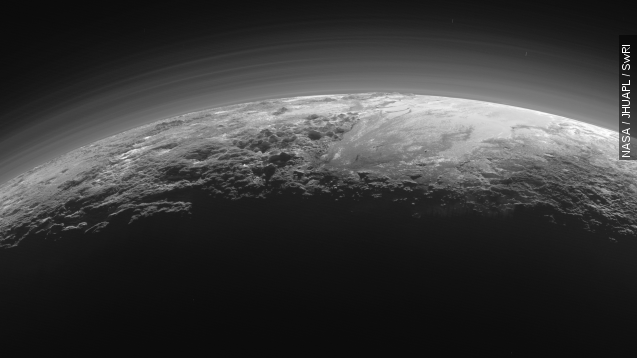 SMS
Pluto's Weather Is More Active Than We Thought
By Evan Thomas
By Evan Thomas
September 18, 2015
With each batch of images that rolls in from New Horizons, scientists learn more about Pluto's characteristics.
SHOW TRANSCRIPT

These backlit shots of Pluto's crescent are more than just excellent desktop wallpapers. Scientists are learning a lot from them, too.

The latest images from New Horizons show there are 12 or more layers to Pluto's atmosphere, some of them close enough to the ground to draw shadows from its mountains.

"These low-lying hazes hint at the weather changing from day to day on Pluto, just like it does here on Earth," said Will Grundy, New Horizons Composition team.

NASA says there's evidence for a hydrological cycle involving nitrogen ice. It appears some of that ice evaporates from the nearby Sputnik Planum and gets deposited on the higher ground to the east.

A closer look suggests the ice forms glaciers that flow back into Sputnik Planum.

Researchers say "this would be directly comparable to the hydrological cycle that feeds ice caps on Earth." (Video via NASA)

Which is an unexpected find that far out in the solar system. It's cold and dim out where Pluto orbits, but NASA's scientists say its geological processes are comparable to those on Mars. (Video via NASA)

"If an artist had painted this Pluto before our flyby, I probably would have called it over the top — but that's what is actually there."

And the high-res images will keep pouring in. New Horizons will be sending data home well into next year. (Video via NASA)