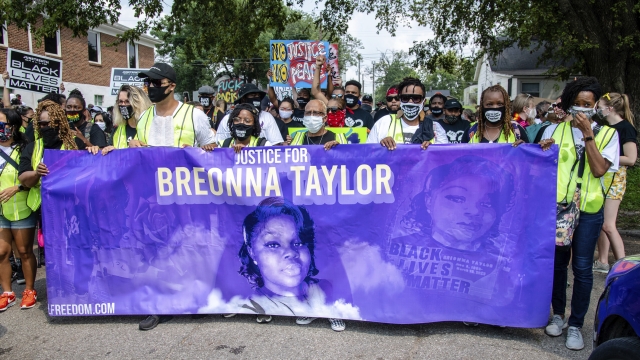 Louisville lawyer Sam Aguiar, who's representing Breonna Taylor's family, said her ex-boyfriend was offered a plea deal that would require him to claim Taylor was involved in a drug ring.

The newly uncovered documents show the plea deal prosecutors offered Jamarcus Glover on July 21. They listed Taylor as a co-defendant in illegal activities leading up to April 22 — weeks after her death. The documents say Taylor's address was a place where Glover picked up mailed packages and kept some of his money. Glover turned down the deal and said Taylor had no involvement.

Officers shot and killed Taylor in her bed on March 13. They were executing a no-knock warrant as part of an investigation targeting Glover, who was arrested that night. No drugs were found at Taylor's apartment.

Taylor's family lawyer called the plea deal an attempt to shift the narrative around her death, which has gained national attention and sparked demands for justice for her killing.

Louisville's top prosecutor, Tom Wine, acknowledged the existence of the plea deal but called it a "draft," and said it wasn't an attempt to smear Taylor. He said she was never a co-defendant in the case against Glover and that the drafts were never part of the court record and are not court documents.

Wine also said when he was advised on the plea discussions, he asked that Taylor's name be removed "out of respect" for her. The copy of what Wine called the final plea deal offered to Glover did not include Taylor's name but did list her address as a place where Glover picked up mail packages.

Additional reporting by Dylan Lovan of The Associated Press.