Playground Equipment Can Cause Burns Even On Mild Days 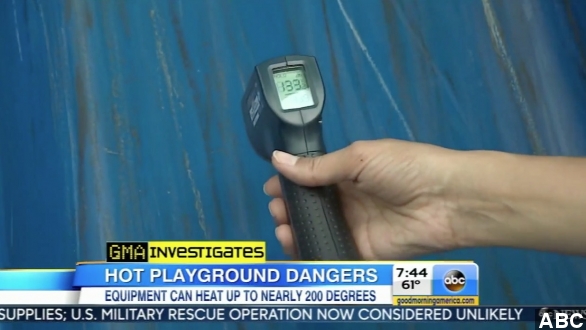 SMS
Playground Equipment Can Cause Burns Even On Mild Days
By Becca Dunn
By Becca Dunn
August 14, 2014
Playground equipment can reach scorching temperatures even on milder days, and children have been getting burned for years.
SHOW TRANSCRIPT

Parents, listen up! ABC tested the temperature of playground equipment across the U.S. with an infrared thermometer at the hottest time of day, and their findings were unbelievable.

ABC: "This baby swing in Houston, 138 degrees. This swing in Phoenix, 150. The black top at the same playground, a whopping 185 degrees."

They also tested plastic slides, which are usually popular features on any playground, and the temps ranged from 158 to 189 degrees.

This is scary, but it suddenly makes sense of the burning butts we remember getting as kids on the playground.

To put the temperatures into perspective, the standard temperature for a hot tub is 104 degrees.

These high temperatures can cause severe burns, and it could only take a matter of seconds.

These are cases of children making headlines for getting burned by playground equipment. Some of them have been serious.

CBS did a a small investigation back in 2010 and talked to a parent whose 18-month-old got second-degree burns from a slide in Des Moines, Iowa.

​"Little Madison suffered burns that blistered on her hands, stomach and knees."

"She was screaming on the way to the emergency room."

So if children have been getting burned by playground equipment for years now, why is it still happening today?

It might be because it's often unexpected. According to the U.S. Consumer Product Safety Commission, it doesn't have to be scorching hot outside for playground equipment to reach dangerous temperatures.

"Even in mild weather, as long as the equipment or surfacing is in direct sunlight for an extended period of time, there is a risk of sustaining a thermal burn injury."

Madison from Des Moines was burned by a 160-degree slide on an 80-degree day.

So how can you defeat the heat and still have fun at the playground? (Video via YouTube / Ashley Jessen)

The Burn Foundation gives us some direction. Make sure to:

--Check the equipment's temperature before having fun

--Look out for warnings on playground signs

--Wear shoes at all times

It's also important to know that the younger a child is, the more at risk he or she is because their skin is thinner and more fragile.