This Plastic Wrap-Inspired Fabric Could Make Some Pretty Cool Clothes 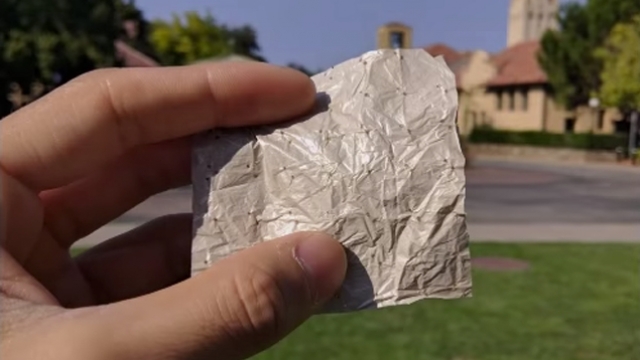 LiteralIy. It's a nanoporous textile that makes the wearer feel about 4 degrees Fahrenheit cooler than if they were wearing cotton.

Scientists have developed a new fabric that could make the coolest clothes ever. Literally.

Check out this high-tech cooling material that scientists at Stanford University came up with.

It's a nanoporous, plastic wrap-inspired textile that makes the wearer feel about 4 degrees Fahrenheit cooler than if they were wearing cotton.

SEE MORE: The Clothes You're Wearing Could Be Made Out Of Plastic Bottles

The fabric does this two different ways. First, it lets sweat evaporate through it, like most ordinary materials do. But this new textile also dispels heat from infrared radiation, which is pretty darn revolutionary.

The human body naturally emits infrared radiation — that's the stuff that makes us show up on heat maps.

Fabrics like cotton and linen trap the radiation and keep us hot.

But there's at least one material that lets that heat out — polyethylene. You know, plastic wrap.

But alas, no one wants to walk around wearing Cling Wrap when it's hot outside. And that's where Stanford's new textile comes in handy.

Scientists hope the material will one day be used in tents, vehicles and even buildings.

And with temperatures continuing to reach record highs around the world, we can't get that fabric in our closets fast enough.