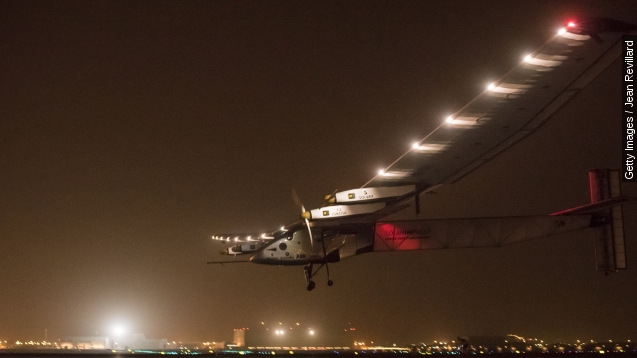 SMS
Plane's 5-Day, Zero-Fuel Flight Means A Lot For Green Tech
By Evan Thomas
By Evan Thomas
May 31, 2015
If it lands in Hawaii, the sun-powered Solar Impulse 2 plane will set a record for the longest-duration single-pilot flight.
SHOW TRANSCRIPT

After a monthlong wait, Solar Impulse 2 is back in the air.

"Next stop, the Islands of Hawaii; six days and six nights away," said the BBC's John Sudworth.

This is the latest — and longest — leg of a trip that started two months ago. Solar Impulse 2 left Abu Dhabi in March in an effort to circumnavigate the globe using only solar power. (Video via Solar Impulse)

The upper surfaces of the plane are coated in solar cells to maximize its collection. Except for its sun-charged batteries, it doesn’t carry any sort of fuel.

The Solar Impulse team says its flight is to demonstrate the broader potential of renewable energy. They hold up the sun-powered plane as a proof of concept for how such clean tech can be made useful.

One thing is for sure: Solar Impulse won't replace any commuter planes anytime soon. It's got a top speed of a little more than 86 miles per hour, is a really lightweight at just over 5,000 pounds and still has a wingspan greater the Boeing 747. Crosswinds can be a bit of a problem. (Video via Solar Impulse)

This will be especially important during the multiday crossing to Hawaii. After flying all night, its batteries can run down to less than 10 percent, so it depends on recharging in clear skies in the morning.

So if the weather doesn’t provide ideal conditions, Solar Impulse can be forced to wait. It spent more than a month stalled in China until conditions aligned over the Pacific.

The more than 130-hour flight will be upwards of five times the duration of the longest previous leg. If it goes well, Solar Impulse II could set a record for the longest flight by a single-pilot aircraft.

And if something goes wrong, Pilot Andre Borschberg could have to ditch over the largest ocean on the planet.

He told The Guardian: "In the worst case we have a parachute, we have a life raft and we know how to use it. Of course, [we're] hoping that we will not need to do that."

After it touches down in Hawaii, Solar Impulse 2 will be on the way to the mainland U.S. on a three- to  four-day flight to Phoenix. (Video via Solar Impulse)