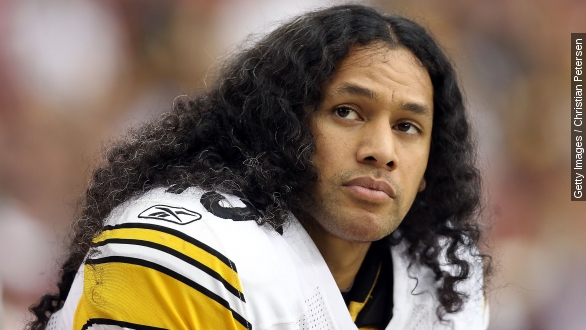 One of the best safeties in NFL history has decided to hang up his cleats for good.

According to the Uniontown Herald-Standard, longtime Pittsburgh Steelers safety Troy Polamalu will retire from the NFL after 12 seasons to spend more time with his family.

The outlet says the eight-time Pro Bowl safety, who turns 34 later this month, quite literally had a come-to-Jesus moment, saying a "realization" he had while at church helped influence his decision.

"Thirty-three is obviously significant because of Christ being 33; and 12 years, 12 apostles. I'm not superstitious by any means but I always thought that if I played 12 years and retire from football at 33 and give my life and give my body and give my blood to this game, I think that would be a pretty significant landmark in my life."

The news doesn't come as too much of a shock. Reports surfaced last month that the Steelers wanted Polamalu to call it quits, so they wouldn't have to cut him from the team.

Polamalu played 12 games last year, but the team was reportedly worried he was becoming a bit of a shadow of his former self and too costly to keep on the Steelers' payroll.

Still, during his heyday, Polamalu was an absolute beast who was all over the secondary. He racked up 32 career interceptions, picked up two Super Bowl rings, was awarded the AP NFL Defensive Player of the Year in 2010 and was selected to the Pittsburgh Steelers All-Time Team.

Plus, that hair. No football fan will ever forget that hair.