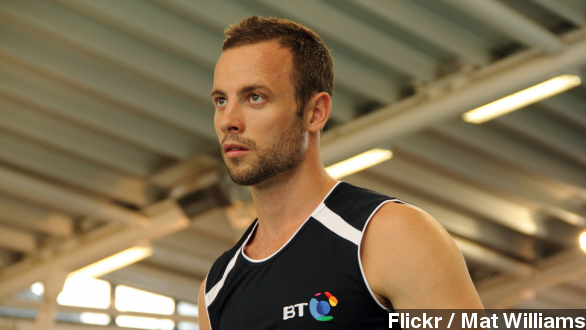 It's a claim that could seriously undermine Oscar Pistorius' credibility on the witness stand.

A spokesperson for Pistorius is denying his client took acting lessons to prepare for his murder trial. (Via CCTV)

The accusations started when South African columnist Jani Allan posted on her website: "I have it from a reliable source that you are taking acting lessons for your days in court."

​Pistorius is accused of murdering his girlfriend Reeva Steenkamp last year. He admits to shooting her, but says he mistook her for an intruder. (Via CBS)

​Throughout the trial, he's vomited and broken down in tears several times.

And that's left some, including Steenkamp's mother, questioning whether the emotion is genuine. (Via New York Daily News, Bustle, Sky News)

An NBC reporter quotes the family's spokesperson, who says: "This type of comment makes a mockery of the enormous human tragedy involving the Steenkamp family." (Via Twitter / @alizanadi)

Others are just as skeptical of the reporter who made the allegation. After all, she does come off fairly biased in her open letter to Pistorius. Calling him, "the latest in a long line of faux heroes" adding, "It’s difficult not to burst out laughing while listening to you."

Here's what Allan said to Fox News's Shepard Smith when he pointed out she does have a personal memoir in the works.

SMITH: "Could this open letter be part of publicity for a memoir?"

ALLAN: "I certainly think it will be. I had no idea it would go so viral."

The trial has been adjourned until May 5. If convicted of premeditated murder, Pistorius could face life in prison.