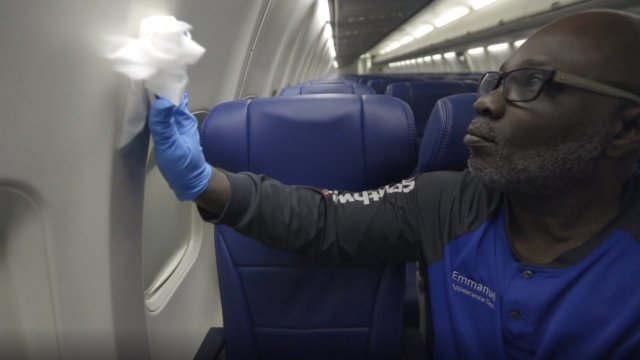 Pilot and flight attendant unions want the FAA to require airlines to do a better job disinfecting planes and notifying crew members when fellow employees test positive for the coronavirus.

The Air Line Pilots Association sent a letter to the FAA asking the agency to create federal standards to help fight COVID-19.

His letter, dated March 31, also said airlines are not always alerting crew members when they’ve been in direct contact with a colleague later diagnosed with the virus.

“Every day our pilots and flight attendants are literally taking their lives in their hands,” DePete said.

All said they have policies about notifying crew members when a coworker on a previous flight tests positive for the virus.

Each airline said it has rigorous cleaning regimens but shared different procedures for sanitizing planes.

United said it is wiping down all hard surfaces in the cabin with high-grade disinfectant.

The kind of cleaner, when and how often it’s used, varies by airlines.

Only Delta shared the name of the cleaning solution it uses: Matrix #3 disinfectant cleaner.

The EPA told Newsy Matrix #3 is an approved substance for airlines to use against the virus that causes COVID-19.

The FAA confirmed it does not have rules for keeping planes free from coronavirus.

The CDC has recommendations but only for if a passenger is known to have the virus.

Those guidelines do not carry the weight of law.

“The airlines agree to meet these voluntary standards,” Joel Szabat, acting under secretary for policy at the U.S. Department of Transportation, told a U.S. Senate subcommittee last month.

“It’s clearly in the economic interest of the airlines,” he said.

Senators at the hearing seemed surprised to learn there were no rules for how to disinfect passenger aircraft.

“I think this is something we need to tackle right away,” Sen. Maria Cantwell said at the hearing.

The Association of Flight Attendants – CWA said passengers should fly only if the trip is essential.

“We are calling for a halt to all leisure travel,” the group’s president Sara Nelson said.

The FAA said it’s now working with the unions to respond to their safety concerns.