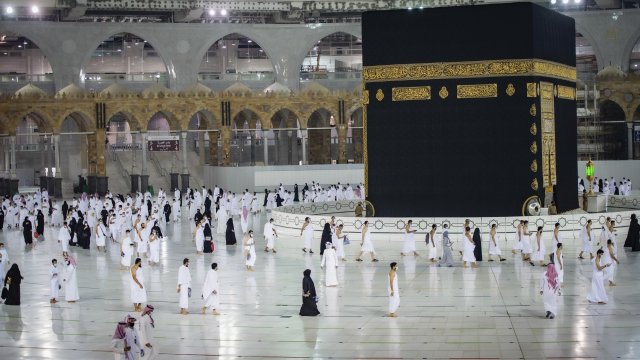 Starting Sunday, the Saudi government is allowing 6,000 people daily. Each person has three hours to complete the pilgrimage.

The smaller "umrah" pilgrimage, which can be taken at any time of the year, was suspended back in March as the coronavirus morphed into a global pandemic, prompting lockdowns.

During the first phase of reopening, only Saudi citizens and residents are allowed to enter and visitors must apply and reserve a time to avoid crowding. Each person has 3 hours to complete the pilgrimage. The Grand Mosque, which houses the cube-shaped Kaaba that observant Muslims pray toward five times a day, is being sterilized and cleaned multiple times a day.

The kingdom held a dramatically downsized, symbolic hajj pilgrimage in July due to concerns that it could easily have become a global super-spreader event for the virus. Despite taking early and sweeping measures to contain the virus, Saudi Arabia has recorded nearly 336,000 cases, including 4,850 deaths.

The second phase of easing restrictions will take effect on Oct. 18, allowing 15,000 pilgrims and 40,000 for prayer, although it will still be restricted to residents and citizens. Muslim travelers from outside Saudi Arabia could be allowed to perform the umrah pilgrimage as early as Nov. 1, according to the Interior Ministry.