Were All These People Duped Into Making Geocentrism Film? 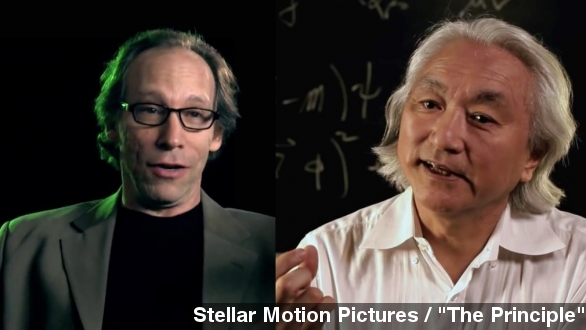 SMS
Were All These People Duped Into Making Geocentrism Film?

By Steven Sparkman
April 9, 2014
Two physicists and a Star Trek actress will appear in a film questioning whether the Earth orbits the sun.
SHOW TRANSCRIPT

It's not unusual for movie trailers to get sci-fi enthusiasts excited, but the trailer for a small documentary blew up on the Internet this week and briefly left those same nerds just... confused.

The film is called "The Principle," and the trailer features two popular physicists and a voice that's unmistakable for Star Trek fans.

"Everything we think we know about our universe is wrong."

The voice you just heard was Kate Mulgrew, most recently known for playing prison chef Galina Reznikov in Netflix's "Orange is the New Black," but also known for playing Captain Janeway in the mid-90's TV show "Star Trek: Voyager."

The physicists were Lawrence Krauss and Michio Kaku, both of whom frequently appear in the media to help explain major scientific findings to the public. So far so good, right? Nothing weird about scientists appearing in a documentary narrated by a sci-fi star. Except this documentary disputes an idea at the very heart of astronomy: that the Earth orbits the sun, not the other way around.

Yes, for a brief period earlier this week, fans were actually starting to wonder whether Mulgrew believed in geocentrism. But she quickly posted her side of the story on her Facebook page: that she's not a geocentrist, that she doesn't support the film's conclusions and that she was "a voice for hire, and a misinformed one, at that." (Via Jezebel, Daily Mail, The Huffington Post)

Krauss said something similar in a Slate article titled "I Have No Idea How I Ended Up in That Stupid Geocentrism Documentary." That's pretty straightforward. He guessed the footage of him was either taken from another source or that he was interviewed under false pretenses.

As far as we could tell, Kaku hasn't addressed the issue.

But Raw Story did some more digging and got in contact with a representative for the filmmaker, who said the film is not about geocentrism. Rather, it questions the Copernican Principle (that's the principle alluded to in the title), that the Earth doesn't occupy a special place in the universe. He said in 600 years, "No one has been able to prove that the Earth is moving."

The film's producers also released a statement slamming Krauss, saying, "I can tell him how he ended up in our film. He signed a release form, and cashed a check." He also claims Krauss himself has made statements affirming the possibility that Earth is at the center of the universe, saying "Yes, folks. He has said exactly that. Please check."

We got curious and went looking. Since the producer didn't say which of Krauss's statements he was referring to, we're guessing that it was his 2006 piece for the Edge Foundation. In it, Krauss talked about the cosmic microwave background, the radiation left over from the Big Bang, and how it appears to line up with Earth's orbital plane.

Krauss wrote: "Is this Copernicus coming back to haunt us? That's crazy. We're looking out at the whole universe. There's no way there should be a correlation of structure with our motion of the earth around the sun ... That would say we are truly the center of the universe."

The findings he's talking about are real and scientists have been talking about the possible implications for years. But throwing out Copernicus isn't one of them. The idea that the sun, not the Earth, is the center of our solar system has been the basis of astronomy — and every interplanetary NASA mission — for hundreds of years, and that's not likely to change any time soon.

As for the controversial film, the movie's rep admitted to Raw Story that Krauss hadn't been told the final product would have a geocentric slant. But he was harder on Mulgrew, saying: "Obviously she knew what the film was about. She read the script into a microphone."