Trump-Clinton Photos Show How Weird This Election Really Is 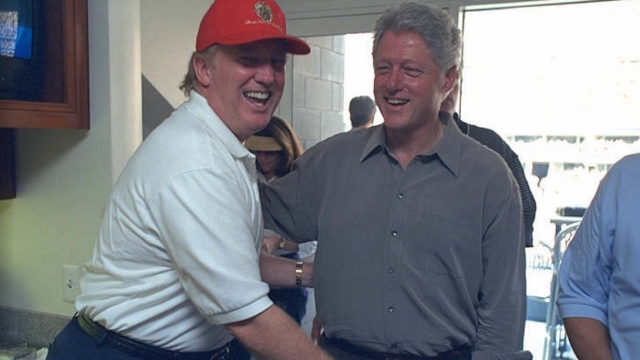 In this pretty ridiculous presidential cycle, there's been no shortage of strange things happening on both sides.  And a batch of new pictures showing then-friends Donald Trump and former President Bill Clinton are pretty close to the top of the list.

Friday, the Clinton Presidential Library released 22 pictures of the former president hanging out with Trump back in 2000. The photos were released after a Freedom of Information Act request from Politico.

So far, neither the Trump or Hillary Clinton campaigns have commented on the chummy photos, but it's probably safe to assume they aren't great for Trump's "I hate the Clintons" schtick.

Throughout his presidential run, Trump has made Bill Clinton's infidelity a campaign issue. He told CNN in January, "How the hell can she do that when she's got one of the great women abusers of all time waiting for her to come home."

Those charges can come off a bit disingenuous when reminders come out about how friendly the two men once were — even after the Monica Lewinsky scandal. And there's not a shortage of material to draw from, either. Trump has often praised both Clintons in the past, even while Hillary Clinton was serving as secretary of state. His flip-flop on the family only happened after he began to run for president.

Trump claims he was nice to the Clintons because they were big-wigs in New York, and he was a businessman. But his detractors have used it to hit his new-found Republican bonafides throughout the primary and into the general election.