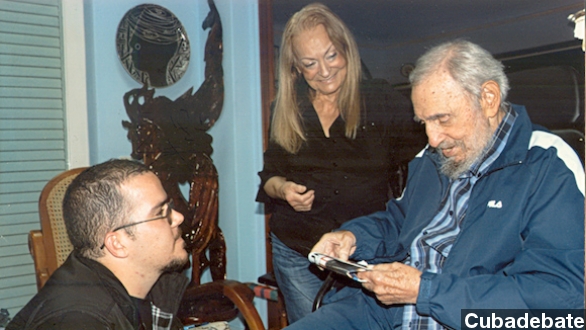 The state-run newspapers Cubadebate and Granma published identical articles written by the student about his visit with the father of the Cuban Revolution.

Lately, rumors of Castro's death have been circulating.

This time it was because of his conspicuous absence from the dialogue on U.S.-Cuba relations.

"Today, the United States is changing its relationship with the people of Cuba," President Obama said. (Video via The White House)

But the normally outspoken Fidel didn’t weigh in on the historic change until more than a month later on Jan. 23. (Video via The Biography Channel)

In a letter to the Federation of University Students, published in a state-controlled newspaper, he wrote, "I do not trust the politics of the United States, nor have I exchanged a word with them, but this is not, in any way, a rejection of a peaceful solution to conflicts."

In 2006, Fidel ceded power to his brother, Raúl, because of his health. Raúl took full control in 2008, but Fidel's opinion is still important to Cuban foreign policy. (Video via History Channel)

In the letter about U.S.-Cuba relations, Fidel wrote that his brother is taking the right steps in talks with the U.S. (Video via Excelsior TV)