How One Photographer Captured Asians In American History 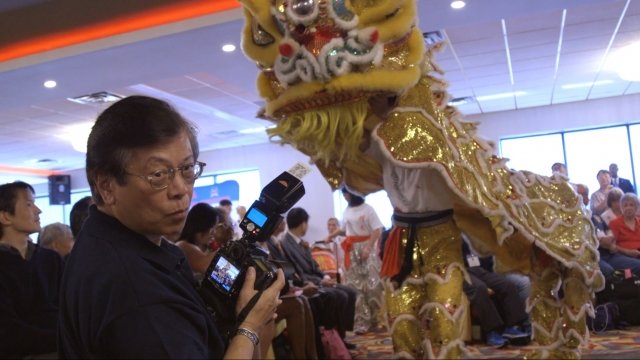 SMS
How One Photographer Captured Asians In American History
By Cat Sandoval
By Cat Sandoval
September 13, 2017
For 45 years, Corky Lee has taken pictures of Asian-Americans to showcase their contributions to U.S. history.
SHOW TRANSCRIPT

For 45 years, Corky Lee has documented Asian-American life through the lens of his camera. Lee has been called the "Kevin Bacon of the Asian-American community" because of his connections to so many people.

He is a self-funded photographer, and his images run the gamut from protests and heritage celebrations to everyday living.

"A photograph is a thousand words. I'm terrible at writing. So if I can explain something I want to do in a photograph that resonates, I've done my job," Lee said.

With no formal training as a photographer, Lee captures historic moments that are still happening today, like hate crimes and police brutality. In 1982, when Vincent Chin was beaten to death because of his race, Lee captured the Asian-American community in protest. In the 1970s, it was police brutality in New York City.

"The significance of that was the image was so shocking to wide audiences because people have never seen Chinese protesting police brutality and basically ending up in the front page," Lee said.

But it was Lee's obsession with the transcontinental railroad that gave him his start as a photographer.

"A lot of people know from the history that the Chinese built that railroad. But this is an indication that there's at least one Chinese still working on the railroad. In this case, he is a conductor. He is basically in command," Lee said.

"The black-and-white photographs that's in every American history textbook — that was the first time that I learned there was any mention of Chinese in American history. So, when I read that, I look at the photographs and I wondered, 'How many Chinese were there in the photographs?' Because you know, it's a photographic proof. But I couldn't see any. I even went to buy a magnifying glass."

Zoom in on the iconic 1869 photograph and you'll see the celebration — the completion of the 1,776-mile transcontinental railroad. East Coast meets the West in a handshake, and a champagne bottle is visible.

The completion of the railroad helped make America a more industrialized country. The railroad took what was a monthslong coast-to-coast trip and cut it down to just three and a half days.

What you don't see in the photo are the Chinese people who made up two-thirds of the workforce. An estimated 10,000 to 15,000 Chinese worked on the railroads, often taking on dangerous jobs. Some even lost their lives.

In an effort to address the misrepresentation of the photograph, Lee proudly shows us his version of the iconic image from the 145th anniversary.

Lee doesn't just embed himself in the Chinese community; he also captures other Asian-American and Pacific Islanders — including Indians and Sikhs.

"At the turn of the century going into the 21st century, everyone was talking about diversity, and that only lasted until a year. Then the following year, you had 2001 — 9/11 happened and there's no diversity, so it was a complete 180 turn from acts of inclusion to basically hysteria about people who don't look like white Americans. In this case, it was Arab- and Muslim-Americans, and it still continues up until today. It's been over 150 years since the Civil War, and we're still talking about race. Charlottesville is one example," Lee said.

Lee says Asian-American activism is more important today than ever. "If we don't stand up for what we feel is our rights, it will be taken away from us," he said.