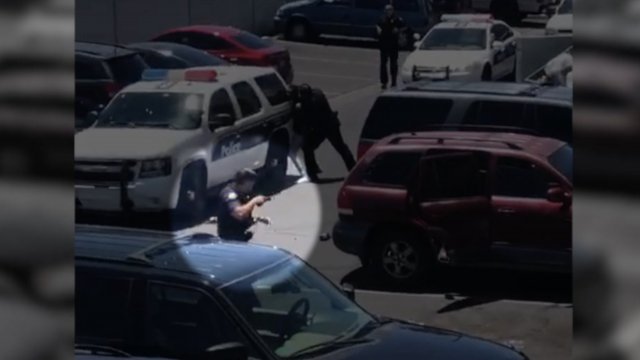 The Phoenix mayor and police chief have spoken out about a video showing officers drawing their weapons, cursing and threatening to shoot a family.

Officials in Phoenix are apologizing as footage of officers drawing their weapons, cursing and threatening to shoot a family continues to spark outrage across the country.

Phoenix Mayor Kate Gallego said in a statement over the weekend she is "sick" over what she saw in the video and is "deeply sorry" for what the family went through.

And Phoenix Police Chief Jeri Williams told Newsy's partners at KNXV her department will be looking at policy and more training in light of the controversial incident.

Late last month, a man and his pregnant fiancee said they were shopping at a Family Dollar Store when one of their two children took a doll from the store. According to a notice of claim filed by the family's attorney, the parents said they didn't realize what happened until they got back into their car.

The claim says a police car followed the family's vehicle to their babysitter's apartment complex. And video taken by bystanders shows what happened next — officers pointing their guns and repeatedly threatening the two adults in front of the two young children. After the man was handcuffed, you can see an officer kick him in the back of the leg.

The Phoenix Police Department said in a statement Saturday the officers were responding to a shoplifting report from the store's manager. Police say the man also stole a pair of underwear, was driving on a suspended license and refused to comply with the officers' commands to pull over.

The family has filed a $10 million civil rights lawsuit against the city of Phoenix. An internal investigation into the incident is underway.