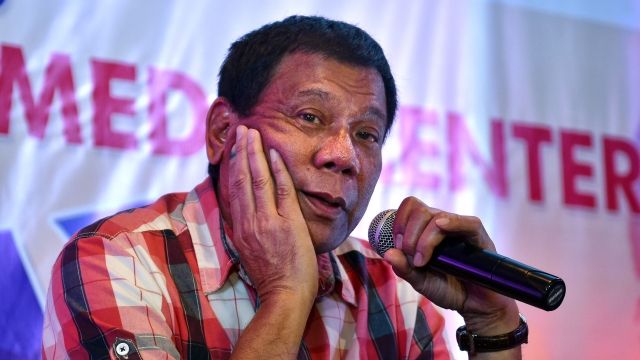 SMS
The Philippines' President Admits He Personally Killed People
By Ryan Biek
By Ryan Biek
December 14, 2016
Philippine President Rodrigo Duterte said when he was a mayor, he shot suspected criminals on the spot.
SHOW TRANSCRIPT

Philippine President Rodrigo Duterte seemingly boasted about killing suspected criminals when he was a mayor.

"I would just patrol the streets and looking for trouble, also. I was really looking for an encounter to kill," Duterte said.

"In Davao, I used to do it personally. Just to show to the [police] that if I can do it, why can't you?" Duterte said.

This isn't the first time Duterte has admitted to killing people. Last year before he became president, he said he killed three men who were suspected of kidnapping and rape.

Others have painted a similar picture of him. In September, a self-proclaimed former death squad member told the Philippine Senate that Duterte killed a justice department agent.

Still, no charges have been filed against Duterte.

Although the world has condemned him, many of his countrymen have strongly supported him, often dismissing his comments or calling them exaggerations.

After his latest comment, Duterte's justice secretary said he "must have been forced [to kill]," despite Duterte himself saying he was "looking" to do that.

Duterte's continued popularity may make more sense when you consider the country's past. The Philippines endured an exploitive dictator and years of corruption before Duterte became president.

Duterte has said he doesn't care about human rights, and it seems some in his country have followed his cue. Since he took office, vigilantes have killed over 3,800 people in the country's "war on drugs."