An Entire Philippine Police Force Will Be Retrained After Teen's Death 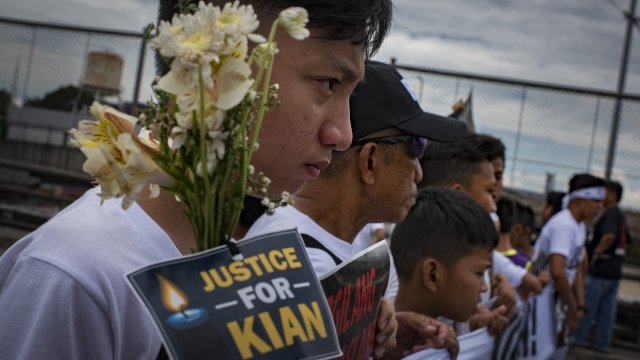 SMS
An Entire Philippine Police Force Will Be Retrained After Teen's Death
By Casey Mendoza
By Casey Mendoza
September 16, 2017
The death of Kian Loyd delos Santos sparked mass protests in Manila — and local police are linked to the killings of two other teens.
SHOW TRANSCRIPT

The decision will affect around 3,500 officers from the Caloocan district. Officials said about 1,200 personnel will undergo retraining for 45 days and then may be reassigned to other police units.

This decision comes a month after the high-profile death of 17-year-old student Kian Loyd delos Santos. The Caloocan City police chief was removed from office shortly after that, but a law enforcement official told Rappler the suspension was not a punishment.

Police shot delos Santos back in August during the "One Time Big Time" drug raid that left more than 30 other people dead. That number is just a small fraction of the more than 3,800 deaths linked to the country's drug war between July 1, 2016 and Aug. 29 of this year.

Despite more than a year's worth of deadly raids, it took the death of a teenager to spark public outrage.

A human rights lawyer told CNN: "Public opinion is changing, people are more willing to speak out. As more abuses come to light, more will oppose it in public."