Philippine Island Of Jolo Under Lockdown After Church Attack 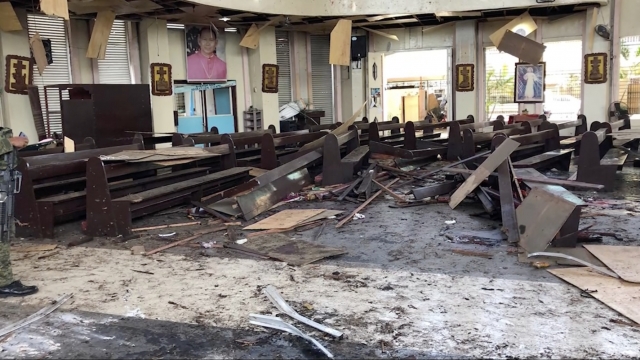 SMS
Philippine Island Of Jolo Under Lockdown After Church Attack
By Katherine Biek
By Katherine Biek
January 28, 2019
At least 20 people were killed and dozens more were injured when two bombs went off at a cathedral during Sunday mass.
SHOW TRANSCRIPT

Authorities in the Philippines placed Jolo island under lockdown on Monday following a deadly attack on a Roman Catholic cathedral in the country's Mindanao region.

At least 20 people were killed and dozens more were injured when two bombs went off at the cathedral during Sunday mass. A military spokesman confirmed one bomb was set off inside the church and the other exploded outside as soldiers rushed to help. ISIS claimed responsibility for the attack.

The bombings come after Muslims in the Philippines overwhelmingly approved the creation of an expanded autonomous region in the southern part of the country.

The province where Jolo is located actually voted against the referendum. But officials hope the creation of the Bangsamoro Autonomous Region will settle more than 40 years of conflict between Muslim separatists and the Philippine government, which has reportedly left more than 120,000 people dead.

As part of their lockdown, authorities have set up additional checkpoints and roadblocks in Jolo while they investigate Sunday's attack.