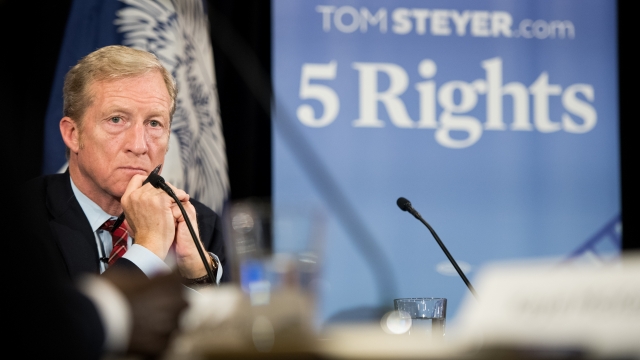 "My name's Tom Steyer, and I'm running for president."

In his first jump into electoral politics, philanthropist Tom Steyer has announced that he's running for president. The Democrat has previously said he wouldn't enter the race.

In a video announcing his candidacy Tuesday, Steyer focused on what he called "corporate control" of politics.

"We've got to take the corporate control out of our politics. All these issues go away when you take away the paid opposition from corporations who make trillions of extra dollars by controlling our political system," Steyer said.

He also touched on climate change.

"What do you care about? We care about improving the world and handing it to the next generation in a way so they can lead better lives than we've had, in a way that's safer, more prosperous, and more beautiful and creative," he said.

Steyer's joining a field of over two dozen other Democratic candidates for the 2020 election.