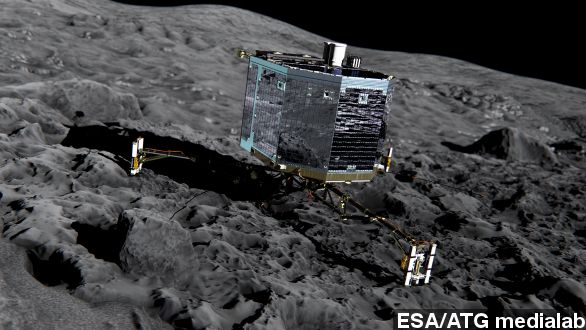 SMS
Philae Makes Successful Comet Landing, Despite Malfunctions
By Evan Thomas
By Evan Thomas
November 12, 2014
The whole expedition hinged on unproven landing technology, which would have to secure the probe to the highly irregular surface of Comet 67P/C-G.
SHOW TRANSCRIPT

Philae has landed on its target comet — the first time a human probe has made such a rendezvous — but it was a close one.

The whole expedition hinged on unproven landing technology, which would have to secure the probe to the highly irregular surface of Comet 67P/C-G.

And the news got worse before it got better — a thruster that would have kept Philae from rebounding when it landed malfunctioned.

At the European Space Agency mission control in Germany, 10 years of waiting came down to hoping the dishwasher-sized probe wouldn't bounce.

EUROPEAN SPACE AGENCY: "We definitely confirmed that the lander is on the surface, and I leave it to Stefan. I think it's up to him to judge how it's going on the lander."

Later updates on Rosetta's Twitter feed showed Philae's anchor harpoons did not fire as originally thought — but the probe is said to be otherwise intact and functioning. The team at ESA is said to be "looking at refire options."

Assuming it stays put, the lander is expected to send back its first images from the comet surface within two hours of touchdown.

And the science won't be far behind — Philae was set to start its first seven-hour block of science experiments an hour or so after it landed. It will analyze the chemical makeup and emissions of the comet and send back more high-resolution images.

Rosetta will stay in orbit around 67P/C-G for the next year and a half, analyzing the gases and particles in the comet's tail as it approaches and swings around the sun. (Video via European Space Agency)

You can follow along on ESA's blog and on Twitter, where it's running profiles for both Philae and Rosetta in orbit.