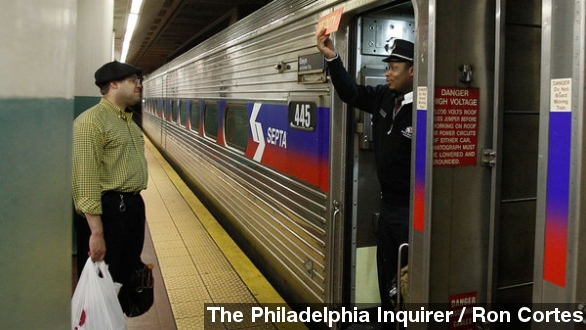 SMS
Philadelphia Transit Workers Go On Strike Over Contracts
By Collin Ruane
By Collin Ruane
June 14, 2014
Union workers for the Southeastern Pennsylvania Transportation Authority are on strike for the first time since 1983.
SHOW TRANSCRIPT

For the first time in three decades, workers for a major transit line in Philadelphia have gone on strike — after failing to work out a new contract.

Four-hundred workers from two unions that work for the Southeastern Pennsylvania Transportation Authority — better known as SEPTA — went on strike at 12:01 Saturday morning, shutting down 13 train lines. (Via WCAU)

WCAU spoke to the vice president of one of the unions, he said workers have been trying to iron out a new contract for the past four years. Workers want a nearly 15 percent raise over the next five years, which is about 3 percent higher than what SEPTA will settle on.

WTXF points out the strike will only affect SEPTA's train lines. SEPTA's buses, subways and trolleys will remain in operation during the entirety of the rail strike. Those account for 85 percent of SEPTA's transit lines.

Those train lines serve about 60,000 riders every weekday, leaving them with the job of finding another way to get around. (Via KYW-TV)

According to The Philadelphia Inquirer, Pennsylvania Governor Tom Corbett is preparing to ask President Obama to put together an emergency board that would help with contract negotiations. That would require employees to go back to work for the next eight months before they could go on strike again.

For the time being, SEPTA has posted alternate routes on its website to popular destinations including the Philadelphia International Airport.

It's not clear how long contract negotiations could go on. The last SEPTA strike back in 1983 lasted for three months.