Philadelphia Mayor Vows Action On Guns, But State Laws May Block Him 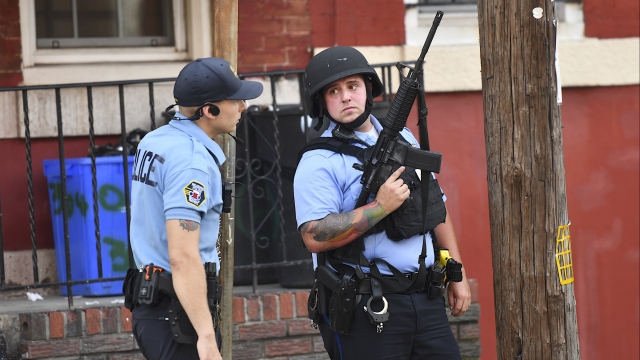 SMS
Philadelphia Mayor Vows Action On Guns, But State Laws May Block Him
By Peter Hecht
By Peter Hecht
August 19, 2019
Mayor Jim Kenney says if federal and state lawmakers won't pass gun restrictions, he will. But Pennsylvania law may stop him.
SHOW TRANSCRIPT

Through the afternoon and evening, his police officers faced a barrage of gunfire.

And after six officers were shot, anguished Philadelphia Mayor Jim Kenney said this on Wednesday:

The next morning, he said the city will act to protect its officers and residents if others fail to do so.

"So I say to our state and federal lawmakers, step up or step aside."

But even after the shootout in which the suspect allegedly had an AR-15 rifle, a handgun and a vast quantity of ammunition, Kenney's determination to pass tougher gun legislation still faces a harsh political reality: Pennsylvania bars local governments from passing any gun regulations that go beyond state law. That is also the case in 42 other states.

The Giffords Law Center, which lobbies for tougher gun laws, says six states can even hold local officials liable for civil or criminal damages or permit their removal from office for preempting state regulations on guns.

Both Philadelphia and Pittsburgh banned assault-style weapons within their city limits 26 years ago. But Pennsylvania passed an anti-preemption law repealing the local ordinances. After a gunman killed 11 people last year at Pittsburgh's Tree of Life synagogue, the city passed new weapons restrictions, but they've been blocked by ongoing legal challenges.

After mass shootings in El Paso and Dayton this month, President Trump and the Republican-controlled Senate have signaled support for so-called "red-flag" laws that would let authorities confiscate firearms from people deemed dangerous. Then again, lawmakers have been unable to reach consensus on 110 gun bills introduced this year, from imposing restrictions on certain weapons or accessories to easing open-carry rules.

So local governments and some states are trying to act on their own. Washington, D.C., and 17 states have already passed red-flag laws.

As a candidate, California Gov. Gavin Newsom championed a state ballot initiative that banned high-capacity magazines. That was overturned in court, and Newsom was left cursing after it was discovered that the suspect in last month's Gilroy Garlic Festival shooting went to Nevada to buy an assault-style rifle that's illegal in California.

After a 2018 shooting left 17 people dead at Marjory Stoneman Douglas High School, then-Florida Gov. Rick Scott signed a protective order law that later allowed authorities to take an AR-15 rifle from a student at another high school who was threatening to kill himself.

In fact, various states passed nearly 50 new gun laws in the 11 months after the Parkland, Florida, shooting. But over the six years prior, most gun legislation loosened restrictions. Two-thirds of 600 measures passed were supported by the National Rifle Association.