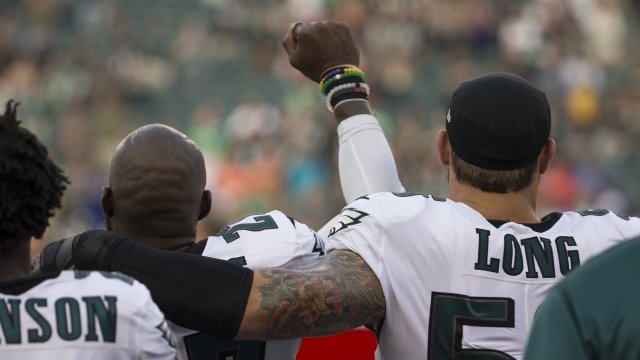 Some NFL players are still using the pregame national anthem to protest racial injustice, but a recent demonstration was a bit different.

Philadelphia Eagle Chris Long showed support for protesting teammate Malcolm Jenkins by putting an arm around his shoulders during the anthem. It's believed that's the first time a white player participated in any of the protests.

After the game, Long explained his actions, saying: "Everybody is trying to turn this political. This isn't a political issue. This is right or wrong. I believe you're on one side or the other."

This could be a tipping point, according to another outspoken athlete — Seattle Seahawk Michael Bennett.

"I honestly believe that it would take a white player to be able to really get things changed because when someone from the other side understands, and they step up, and they speak about it, it would change the whole conversation," Bennett said on "SportsCenter."

Long said he felt the need to speak up especially because he grew up in Charlottesville, Virginia. He said he was appalled by the rally that drew several white supremacist groups and left three people dead.

Long added that he would never kneel for an anthem but said wanted to be supportive.

Protesting can be a risky decision. Jenkins said he believes that Colin Kaepernick, the player who's drawn the most attention for protesting, is still out of a job because he chose to speak up.