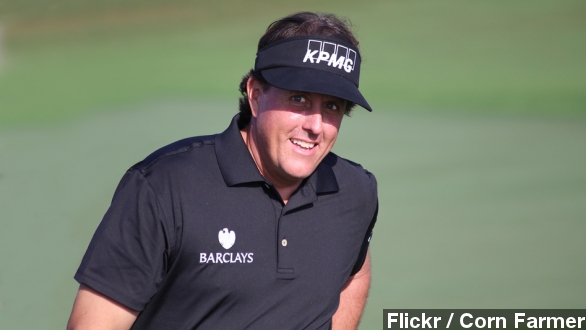 When playing professional golf, it's probably best not to have any distracting thoughts like whether or not you forgot to turn off the stove. Unfortunately, Phil Mickelson has a pretty big distraction to worry about during his current tournament — the FBI.

A New York Post columnist tweeted that Mickelson, who's been competing in The Memorial Tournament in Dublin, Ohio, was approached by two FBI agents after finishing a round Friday. He later said he was cooperating with the probe in a statement on Saturday:

"I think that, you know as a player you have to be able to block out whatever is going on off the golf course and be able to focus on the golf course. ... Honestly, I've done nothing wrong. I'm not going to walk around any other way."

So what stock was at the center of this alleged insider trading between a golfer, sports-better and billionaire investor? Well, it has to do with bleach. Clorox bleach, specifically.

According to The Wall Street Journal, the investigation began three years ago when Icahn made a bid to buy Clorox. Well-timed trades by investors including Mickelson and Walters around that time had then caught the attention of investigators.

But Icahn's position as a "shareholder activist," or an investor who tries to push changes on a company through its stock to increase shareholder value, has made the case unique:

"Leaks by activists about positions they are building is a murky area of securities law. Some lawyers in recent years have advised investing clients that such leaks don't violate securities laws because they don't represent a 'breach,' or violation, of a duty to keep the information secret."

The New York Times writes that the fact that Ichan's takeover bid failed could avoid potential illegalities, saying that "Since Mr. Icahn never joined the Clorox board, he probably owed no duty to the company or its shareholders."

While Walters has made no comment, Icahn called the notion of him being involved in insider trading "inflammatory and speculative."