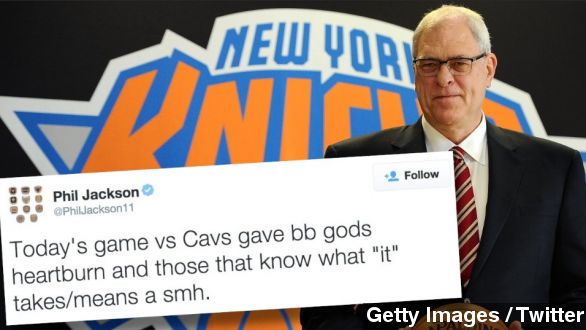 He knew the team was in need of some rebuilding when he first accepted the job, but things might be worse than he previously thought.

Phil Jackson, president of the New York Knicks, publicly ripped his team Sunday after another embarrassing loss to the Cleveland Cavaliers.

Jackson said on Twitter: "Each NBA game is an opportunity for players to show their 'best' nature and please the basketball gods...and those who know what 'It'takes (sic). ... Today's game vs Cavs gave bb gods heartburn and those that know what 'it' takes/means a smh."

The Knicks lost to the Cleveland Cavaliers 101-83 Sunday night, and New York was out of it from the start, trailing by 19 points after the first quarter.

Now, it's not the first time Jackson's voiced concern over the team's performance. He expressed his disappointment earlier in the season when the team had fallen to a franchise-worst 4-18.

There's also the criticism he unleashed to The New York Times a little later in the season, saying, "So far, my experiment has fallen flat on its face."

" ... the more and more you're going to come around to my way of thinking that he's overmatched for this gig. ... This is a 65-year-old man who's supposed to be extraordinarily bright. ... I don't know what the hell he's talking about," said CBS Sports anchors.

There was no love lost with NESN, whose writer asked, "How's that New York Knicks gig working out for ya, Phil Jackson?"

And both the New York Post and New York Daily News blasted Jackson over his roster decisions.

Since arriving in New York, he's traded away Tyson Chandler to Dallas, J.R. Smith and Iman Shumpert to Cleveland and bought out Amar'e Stoudemire's contract. And it doesn't help Carmelo Anthony is sidelined for the rest of the season as well.

Jackson signed a five-year, $60 million deal with the Knicks last year, so he might need to stock up on the heartburn medicine.