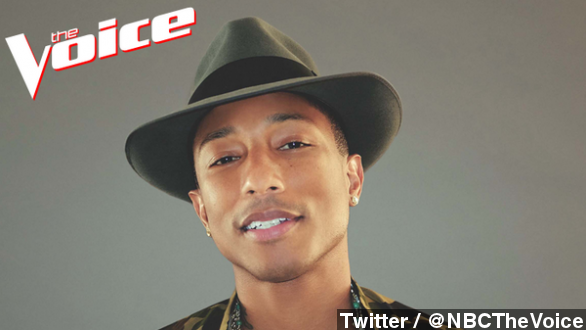 By Lauren Zima
March 31, 2014
The singer/songwriter/producer will coach on the hit competition's show seventh season, a major 'get' for NBC.
SHOW TRANSCRIPT

Fresh off an Oscar nomination, he's heading to ... reality TV.

OK, it's not the "Real Housewives" or anything. Singer/songwriter/rapper/producer/fashion designer Pharrell Williams already wears many hats, and one big one. And now he'll add 'vocal competition coach' to the list. (Via Universal Studios / Pharrell Williams)

He'll replace Cee Lo Green on "The Voice." Green has been with the hit show since its 2011 premiere. He announced in February he'd be departing to focus on his own music.

The show announced the news about Williams on Twitter Monday, with, of course, the hashtag Happy.

It's quite a get. Williams is on a career high after producing hits like "Blurred Lines" and "Get Lucky," winning Grammys, snagging an Oscar nom for his song "Happy" and more. The past year has been huge for him. (Via Star Trak LLC. / Robin Thicke)

"The Voice" won't be entirely new territory — Williams previously appeared on the show as an adviser for Usher's team. He'll start as a coach this fall.

Earlier this month the show announced another new face; Coldplay frontman Chris Martin will appear as an adviser starting March 31. (Via People)

Coaches Adam Levine and Blake Shelton have been "The Voice"'s constants; they've appeared on every single season. But, right now it's still unconfirmed whether or not they'll be back for season seven.