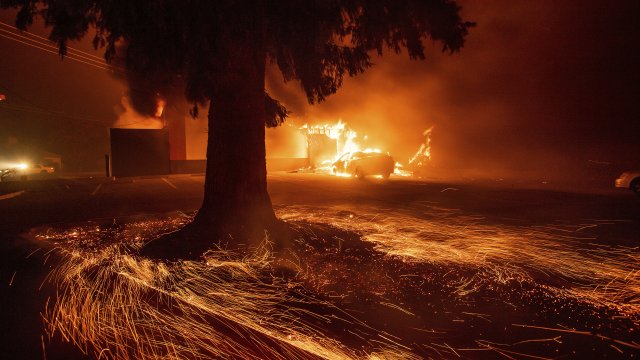 SMS
PG&E To Plead Guilty To Manslaughter Over California Camp Fire
By Briana Koeneman
By Briana Koeneman
March 23, 2020
The utility company said it reached a plea deal with the district attorney in the county where the Camp Fire started.
SHOW TRANSCRIPT

California's Pacific Gas & Electric Co. says it will plead guilty to involuntary manslaughter for its role in starting the 2018 Camp Fire — the deadliest fire in the state's history.

In a statement released Monday, PG&E said it reached a plea deal with the district attorney in the county where the Camp Fire started.

Under the agreement, PG&E will plead guilty to 84 counts of involuntary manslaughter and one count of unlawfully starting a fire. It also agreed to pay approximately $4 million in fines. In exchange, all state charges against the company that are related to the Camp Fire will be resolved.

PG&E filed for Chapter 11 bankruptcy protection early last year after its equipment was found to be responsible for starting multiple destructive northern California wildfires in 2017 and 2018.

Ever since, the company has been trying to come up with a plan to emerge from bankruptcy. If it's able to do so by June, it will be able to participate in a new state wildfire fund, which will help California's investor-owned utilities cover liabilities related to future wildfires.

PG&E's plea agreement is still pending approval by a state court and the federal court overseeing the company's bankruptcy case.