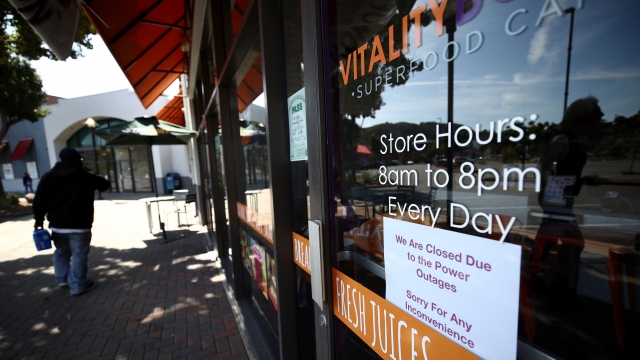 The California utility has turned the lights back on for residents blacked out amid fires and windstorms. But complaints and state scrutiny mount.

California's Pacific Gas & Electric Co. has restored power to some 360,000 customers as wildfires continue to burn throughout the state, even though dangerous winds have died down. That's the good news for the company and most of the customers who were in the dark.

The bad news is that PG&E is drawing scrutiny over whether a malfunctioning transmission line may be to blame for sparking a nearly 80,000-acre brush fire in California's wine country. The Kincade Fire in Sonoma County has destroyed more than 350 structures, including more than a dozen homes.

PG&E already faces a blizzard of lawsuits, and calls to break-up the company. That's as state officials investigate alleged company equipment failure in the 2018 Camp Fire that killed 85 people and destroyed 13,500 homes in the town of Paradise.

The company is in bankruptcy and its stock tumbled more than 20 percent on Monday, a day after Gov. Gavin Newsom publicly courted would-be bidders to buy it. Newsom said: "I want as many people bidding for the assets of Pacific Gas & Electric as possible."

PG&E and other California utilities are being pressured by state officials for massive infrastructure improvements to bury utility lines and clear brush to reduce fire danger.

Near Los Angeles, the Getty Fire that destroyed 12 houses this week was blamed on a tree branch hitting a city power line.

And Southern California Edison acknowledged that its equipment set off a fire that destroyed 1,600 structures in Ventura County last year. Edison also confirmed it had an active transmission line where a major fire broke out Wednesday, threatening the Ronald Reagan Presidential Library in Simi Valley.