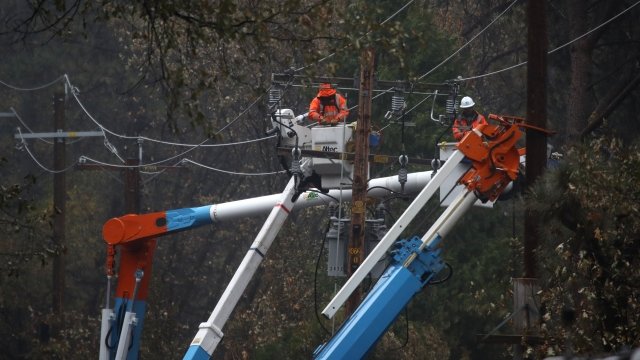 By Caitlin Baldwin
December 6, 2018
The complaint claims Pacific Gas and Electric could have prevented the fire.
SHOW TRANSCRIPT

A class action lawsuit alleges a California utility company is to blame for the deadly Camp Fire.

Attorneys of several residents affected by the blaze filed the lawsuit with the San Francisco County Superior Court on Wednesday. The complaint claims Pacific Gas and Electric, or PG&E, could have prevented the fire but "continued to cut corners and put profits over safety, and continued to operate dangerous equipment without adequate risk management controls in place."

The suit follows similar claims against PG&E, including a lawsuit filed in November that alleges alleges the company's "inexcusable behavior contributed to the cause of the Camp Fire."

The Camp Fire is California's deadliest and most destructive fire on record. It killed 85 people and destroyed nearly 18,800 structures.

PG&E said in an earlier statement, "It's important to remember that the cause [of the Camp Fire] has yet to be determined."

As Newsy has previously reported, California's Department of Forestry and Fire Protection linked some of the state's deadly fires last October to PG&E's power lines.