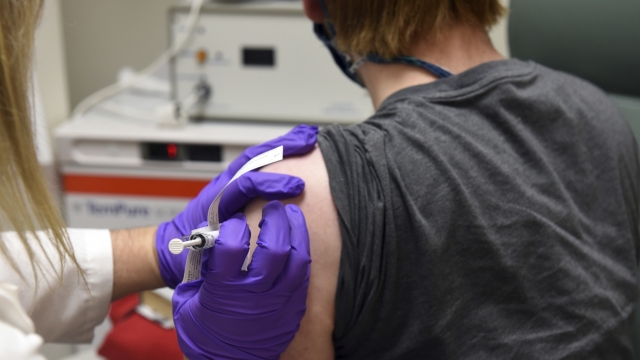 SMS
FDA OKs Pfizer To Test COVID-19 Vaccine On Kids As Young As 12
By Lindsey Theis
By Lindsey Theis
October 15, 2020
A Pfizer spokesperson told Newsy their researchers are “following a careful, stepwise approach as we move down to younger age groups."
SHOW TRANSCRIPT

For Elizabeth Power of Nebraska, like so many parents in this pandemic, the well-being of her three children is most important.

"That's a little scary. As a parent, you know, how will this impact my child?" She told Newsy. "Could my kid be the one that is severely impacted that ends up in the ICU? I don't want to take that risk."

The latest numbers show more than 277 thousand kids in the U.S. have gotten sick with COVID-19. More than three thousand have been hospitalized. Over 100 children have died.

Now, the FDA has OK’d Pfizer to let kids as young as 12 test its experimental COVID-19 vaccine candidate. A Pfizer spokesperson told Newsy their clinical trial researchers are "following a careful, stepwise approach as we move down to younger age groups."

Dr. Mark Esper, a Pediatric Infectious Disease Specialist at the Cleveland Clinic, says he’s getting a lot of questions from parents about a COVID-19 vaccine for children.

He adds though, children’s immune systems look different as they mature. So a ten year old, 13 year old, and 16 year old could respond very differently to an experimental vaccine.

"No vaccine will be FDA approved for children until it is tested in children," he said.

The American Academy of Pediatrics supports the move. In early October, AAP President Dr. Sally Goza wrote the Department of Health and Human Services, urging children be included in the vaccine trials, even though they’re far less likely to get seriously ill from the virus.

"It's only rare if it's not your child. And so if it's your child, it's not rare," Goza told Newsy.

If drugmakers want to test patients younger than 12, it would require a new study and possibly a modified formulation or dosing schedule. A Pfizer spokesperson told Newsy they are working with regulators on a potential pediatric study plan for that.

Goza says it's important for transparency to help parents understand the methodical nature of the process doesn’t mean it has to move slowly.  Health experts also add just like in adult trials, any adolescent participant pool needs to be diverse.

"We really do want a wide swath of ages, races, ethnicities. It's really important that this vaccine work for everyone, or if it doesn't that we understand why and we can compare other vaccines and see how might one better fight a population than another," Dr. Susanne Doblecki-Lewis, Moderna Vaccine Site Principal Investigator at University of Miami said.

"The data does show that our Black and LatinX children are at higher risk for complications of COVID. And that's a very concerning issue," Goza said.

Pfizer had announced including 16- to 18-year-olds in September. It’s one of four companies in advanced Phase 3 clinical trials in the U.S. Two others are on hold after testers came down with an unexplained illness. But for moms like Elizabeth Power, that may place doubt.

"That is a lot of responsibility for any family and especially a preteen to kind of understand what they're going through," she said.

The American Academy of Pediatrics says they’re hopeful a COVID-19 vaccine will be available for children by fall of 2021.