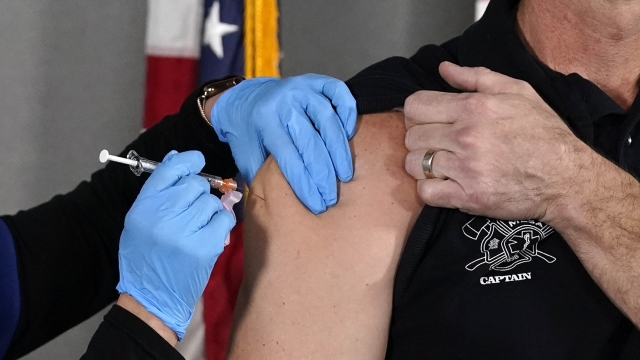 Pfizer is trying to convince federal authorities to green-light a COVID booster shot.  The COVID-19 vaccine maker began the week by briefing the FDA on the need for a third shot to protect against new variants.

Pfizer cites data out of Israel showing a decline in its vaccine effectiveness from more than 90% down to 64% as the Delta variant spreads. But for now, Israel is only offering a third dose to its most vulnerable citizens. Ramping up production would take months.

"I don't think we want to be here in December with a new variant that seems to be abating our vaccine and we don't have anything that's in the pipeline all ready to go," Dr. Stephen Schrantz of the University of Chicago Medicine told the Associated Press.

Now Pfizer is seeking FDA approval for booster shots here in the U.S. The company says its own data also shows a drop in protection against mild illness over time. Pfizer says it's most focused on boosters for the elderly and other high-risk individuals.  But top U.S. health officials aren’t convinced... at least not yet.

"Right now, given the data that the CDC and the FDA has, they don't feel that we need to tell people right now -- you need to be boosted," Dr. Anthony Fauci told CNN.

Last week, CDC and FDA issued a statement saying "Americans who have been fully vaccinated do not need a booster shot at this time.”

Dr. Anthony Fauci says even though boosters aren’t needed now, they could be down the road.

"That doesn't mean we stop there, we continue. There are studies ongoing as we speak about looking at the feasibility about if and when we should be boosting people," Dr. Fauci said.

Former officials are frustrated by the mixed messaging on booster shots.

"This whiplash really is troubling to the American people. But understand, vaccinations are your best bet right now. They're still incredibly effective," said former U.S. Surgeon General Jerome Adams in an interview with CNN.

"They are a private-sector company.  I can’t speak to their — the origin or the motivation of their announcement; you’d have to ask them that.  But the role we can play from the U.S. government is to provide accurate information," she said.

It’s still unclear WHEN Pfizer says vaccinated Americans would need their booster shot. It’s also unclear what this means for people who got the Moderna vaccine, which is similar to Pfizer's —or the Johnson and Johnson vaccine, which is different. Still, doctors say getting a vaccine of any kind is the best way to prevent a COVID infection.