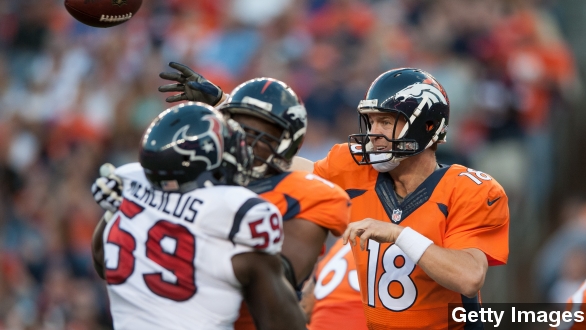 By Matt Moreno
August 28, 2014
The NFL hit Manning with a $8,268 fine after he was flagged for taunting Texans safety D.J. Swearinger during a preseason game.
SHOW TRANSCRIPT

Peyton Manning's check will be about $8,000 smaller next payday after the NFL levied a fine on the veteran quarterback. But Manning seems to be taking it well.

In last week's preseason game between the Denver Broncos and Houston Texans, Texans safety D.J. Swearinger put a hard hit on Broncos receiver Wes Welker. Welker got a concussion from the hit. Swearinger was not flagged or penalized by the league, as it was a legal hit.

But there's no debate that it was a hard hit on an unsuspecting receiver going over the middle.

Manning was fired up over the hit and had choice words for Swearinger later, as reported by The Denver Post's Mike Klis.

Those "adults only" words earned Manning a flag for taunting and subsequently a $8,268 fine.

And we're sure $8,000 isn't much to one of the league's best QBs, who's making an estimated $20 million this year, according to numbers from USA Today.

In fact, a writer for NFL.com called it "couch-cushion change."

And Klis compared it to his version of paying for a "turkey sandwich."

It's certainly a far cry from the most expensive one ever put on a player for an on-field play, which is the $100,000 levied on Lions defensive lineman Ndamukong Suh last year.

It's the first time Manning has been called for an unsportsmanlike conduct penalty after 16 NFL seasons.

The concussion Welker suffered was his third in the past year. It's unclear whether he'll be ready for the Broncos' season opener or even the season.