Peterson's Return To NFL Still In Question After Plea Deal 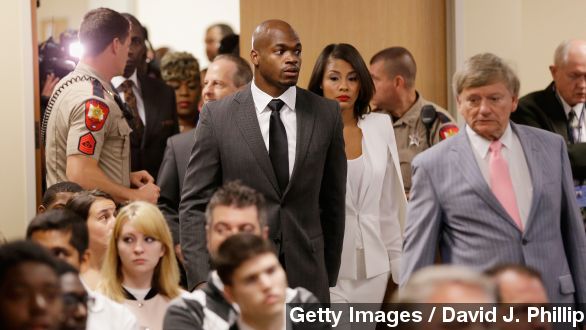 SMS
Peterson's Return To NFL Still In Question After Plea Deal
By Matt Moreno
By Matt Moreno
November 4, 2014
Vikings running back Adrian Peterson accepted a plea deal that will allow him to avoid jail time, but there's been no word on his future with the NFL.
SHOW TRANSCRIPT

It looks like Minnesota Vikings running back Adrian Peterson will avoid jail time after reaching a plea deal Tuesday.

According to a report from NBC Sports: "Peterson will plead no contest to one count of misdemeanor reckless assault. The plea will not include reference to family violence or violence against a minor."

REPORTER MICHELE STEELE FOR ESPN: "No jail time for Adrian Peterson even though, according to Texas state law, misdemeanor reckless assault you could be punished up to a year in prison. Instead, he'll get probation, a fine as well as community service."

Talks of a plea deal started leaking over the weekend, even though Peterson wasn't due back in court until Tuesday.

Peterson originally was indicted on felony charge of injury to a child, charges that carried a sentence of up to two years in prison if convicted.

NBC: "The star running back has pleaded not guilty to charges of reckless or negligent injury to a child after he says he disciplined his son with a tree branch, or a switch, at his Texas home earlier this year."

Still, its not clear when or if Peterson will see an NFL field again. He's been placed on the commissioner's/exempt list since Week 1, and the NFL hasn't released any indication or update to his status. The only time Commissioner Roger Goodell has spoken publicly about Peterson was during his much-analyzed press conference in September.

GOODELL VIA WCCO: "While I'm disappointed in what Adrian Peterson was involved with, we want to see the facts. But I think what we've seen, it's tragic and hard to look at."

While on leave from the Vikings team, Peterson did still get paid his full $5.3 million salary. Peterson could face a fine from the courts as well as the Vikings and the NFL.